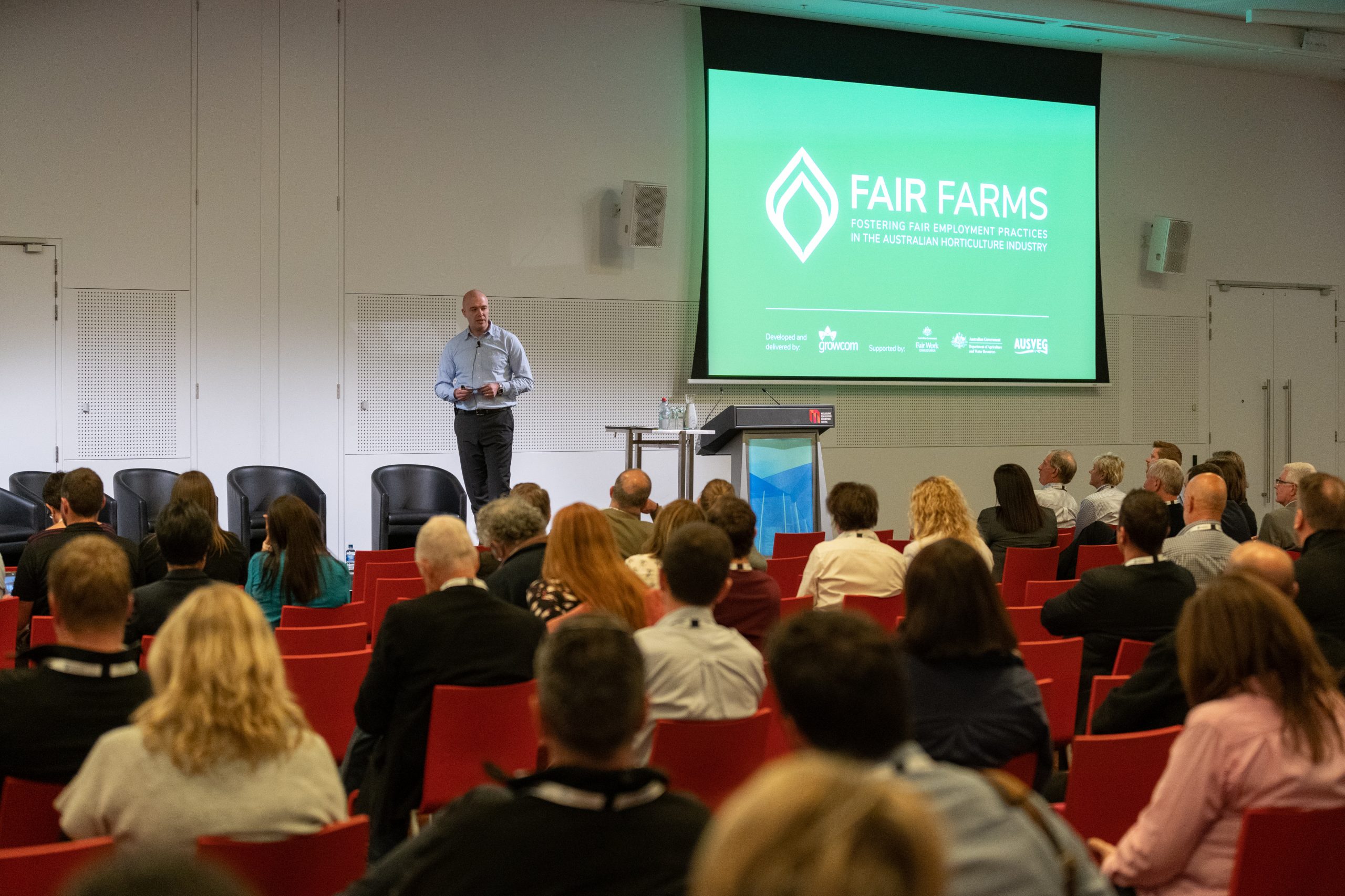 Delegates who took part in the AUSVEG stream at Hort Connections 2019 heard from a host of first-class speakers addressing a host of issues affecting the vegetable industry today and into the future. Jenny Gilbert reports.

The AUSVEG Speaker sessions at Hort Connections saw the launch of Australia’s first Fair Farms Standard and included insights into the potential for energy savings on-farm and export developments in Asia and the Middle East. The stream was sponsored by Boomaroo Nurseries and chaired by AUSVEG Deputy Chair and Queensland vegetable grower, Belinda Adams.

Thomas Hertel, Growcom program manager for the Fair Farms Initiative, kicked off the session by launching the Fair Farms training and certification program, which enables horticultural growers to demonstrate their commitment to fair employment practices.

Designed specifically for the horticulture industry, the new training and certification program has been developed by Growcom over the past 18 months following intense consultations with key stakeholders and industry experts. Financial support has been provided by AUSVEG, the Fair Work Ombudsman and the Department of Agriculture and Water Resources.

During the stream, Thomas announced that Queensland herb growers, Mary Jane and Cam Turner from Riverdale Herbs, were the first producers in Australia to be certified under the new program.

The Turners run a family operation at Yatala, south of Brisbane, and they played a leading role in testing the new training and certification program.

“While growers say that labour is one of their biggest challenges, those who achieve this certification are demonstrating that they are ethical employers who care about their employees and doing the right thing by them,” Thomas said.

“In a spirit of transparency, those growers who invest in certification will also be rewarded by suppliers, retailers and consumers who want produce that is picked and packed ethically by people who are not exploited.”

Charles Luo, from engineering and environmental consultancy pitt&sherry, gave insights into the potential for growers to improve on-farm energy productivity. Charles said Australian farmers spend an estimated $3.5 billion a year on energy, of which $3 billion is spent on diesel fuel and $380 million on electricity.

“Our work shows that for every dollar spent by Australian farmers on energy, they need to earn an additional $17 in revenue,” he said.

The company has partnered with AUSVEG VIC over the past four years to help vegetable growers address energy productivity. In one specific program, pitt&sherry has been working at 12 large vegetable farms in Victoria to understand their existing energy use, identify what’s needed and come up with more effective solutions.

“But we found ways for those growers to save more than $400,000 a year or $34,000/farm by adopting simple energy-saving solutions such as monitoring software, pipework insulation and solar PV, with a payback period of 3.9 years.” He recommended simple steps such as optimising refrigeration by replacing old seals and using high speed roller doors on cool rooms.

“Growers should also be calling their energy retailers every year to ask for better deals.”

Challenges in feeding a growing population

A timely reminder about the global challenge of feeding the world and protecting the planet came from Elizabeth Hernandez, Corteva Agriscience Head of Government and Industry Affairs.

“The defining challenge for our industry is that we need to feed 10 billion people by 2050, requiring a 70 per cent increase in farm output,” she said.

“Asia will make up 60 per cent of the world’s population and as incomes rise, so too will the demand for high quality produce.

“We define this as the food system for providing sufficient healthy food while removing greenhouse gases from the atmosphere and it will require new levels of collaboration and partnership between government, producers and the value chain,” she said.

Export perspectives came under the spotlight in a fascinating panel discussion moderated by Hort Innovation Trade Lead Dianne Phan. Dianne said 80 per cent of Australia’s $2.1 billion fresh produce exports go to Asia and this has doubled in the past five years.

Trent De Paoli described Austchilli Group in Bundaberg as a vertically integrated growing and distribution business supplying local and export customers with a range of chilli products and others such as Avofresh avocado in a tube.

Trent said that 10-15 per cent of the company’s revenue comes from exports in what he described as a risk management strategy to diversify the company’s income and investment stream.

“Our export activities give us a global perspective,” he said.

Trent summed the keys to export success as investing time to develop long-term, trusting relationships with customers, following up and following through, and taking a solutions-based approach to addressing customer problems.

“Being Australian opens the door overseas, but the rest is up to you,” he said.

AUSVEG National Manager – Export Development Michael Coote emphasised the importance of capturing export opportunities for Australian vegetables, with 60 per cent of the world’s population in Asia, on Australia’s doorstep and just a few hours away by air.

Trends such as smaller families, snacking and convenience were evident among Malaysian consumers, according to Kelly Lim, trading manager with Tesco in Malaysia. Tesco has over 60 stores in the country, selling a wide range of Australian produce.

Daniel Cabral from Kibsons International, Dubai, buys Australian vegetables and fruits such as mangoes and strawberries for his customers in the United Arab Emirates.

“I’m looking for good quality, affordable produce at a fair price,” he said.

Daniel urged growers to understand who they are supplying and what’s happening in their markets, recognising that the market in the United Arab Emirates is highly competitive, with buyers having access to an enormous variety of produce from all over the globe.

“Remember that the Middle East is not one single market and customers in the UAE have very different requirements from those in Saudi Arabia and Kuwait, or elsewhere like China and Singapore,” Daniel said.

“While there is always an alternative, Australia has built a name for consistency, premium quality and ethical practices.

“This reputation will continue to strengthen as long as growers take a long-term approach to relationship building and don’t take their foot off the pedal.”

In the meantime, a comprehensive wrap-up of last year’s event can be found on the AUSVEG website.