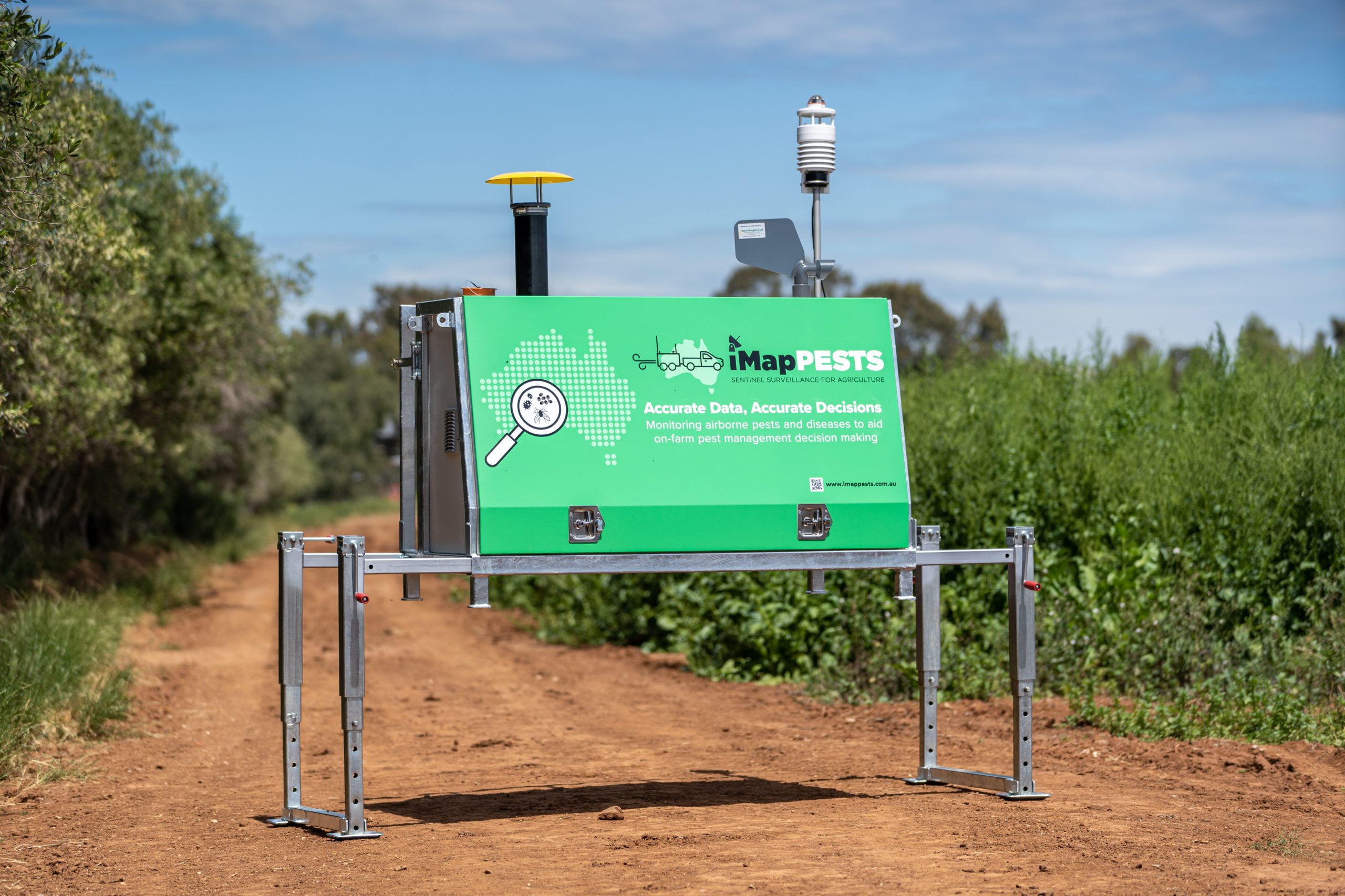 iMapPESTS is a five-year project that aims to provide a framework for a coordinated cross-industry system that can rapidly monitor and report the presence of high-priority airborne pests and diseases. Three new mobile surveillance units have been trialled and optimised for in-field trials throughout the country over 2021, bringing to the suite to a total of six units. The sentinels will capture airborne samples that are examined to identify high priority pests and pathogens for reporting to industry. Shakira Johnson provides a project update.

The iMapPESTS: Sentinel Surveillance for Agriculture program is researching and developing smart surveillance and cutting-edge diagnostic technologies. These include custom-designed mobile surveillance units (termed ‘sentinels’) that incorporate specialised airborne trapping equipment and technology. Sentinels are deployed to various locations around the country to capture airborne samples that are examined in a laboratory to test the presence or absence of priority pests and pathogens.

In a unique collaboration that is utilising the latest technologies, Australia’s agriculture and horticulture industries have joined forces to develop a national surveillance system capable of rapidly monitoring and reporting the presence of airborne pests and diseases for multiple agricultural sectors, including viticulture, grains, cotton, sugar, forestry and horticulture.

iMapPESTS completed the construction of six sentinels in early 2021. The fourth sentinel in the suite of six was delivered at the end of October 2020 to South Australia. It was deployed in its maiden trial at Anthony De Ieso’s Thorndon Park Produce vegetable growing operation in the northern Adelaide Plains, before being deployed at Cobbledick Produce in the Adelaide Hills. Sentinels 5 and 6 were delivered to iMapPESTS’ headquarters at the Waite Campus in Adelaide in early 2021 for initial testing and optimisation of the new units. Throughout the year, these six sentinels will be deployed to different environments and crops around the country for extensive testing and optimisation.

Every sentinel looks unique but all six share similar features – each is equipped with several airborne samplers, power supply, a weather sensor, telemetry and an industrial computer for remote control and monitoring. They also include automated technology to configure samplers for different sampling requirements.

The new edition units – sentinels 4, 5, and 6 – are smarter, smaller, lighter and more flexible compared with earlier sentinels, which is particularly important in a period where movement of people and goods can change quickly, and especially important for responsiveness to biosecurity incursions.

As iMapPESTS nears the end of the initial sentinel development stage, this year the project team will aim to focus on deploying all six sentinels to multiple strategic locations across the country for in-field trialling. Each trial gives the team the opportunity to engage with stakeholders in the region and deliver important pest and disease data that could help inform on-farm pest management actions, biosecurity response efforts and area freedom claims.

“The sentinel will help us be more efficient on-farm. The information will offer insights into the patterns of insect pest numbers and how weather may be influencing their movement, allowing us to make informed pest management decisions,” Anthony De Ieso said.

Next generation diagnostics gears up over 2021

Molecular testing can deal with large numbers of samples rapidly and accurately. Yet, molecular tests for many of the pests and pathogens do not yet exist. iMapPESTS includes the development of more diagnostic tests using next-generation sequencing by Agriculture Victoria (AgVic), Sugar Research Australia and the University of Queensland.

The iMapPESTS diagnostics collaboration is exploring something known as high throughput sequencing (HTS) to investigate ways of reporting on a wider range of insects captured, including targets of biosecurity concern. This is because the HTS approach takes a sample of insects or fungi captured by the trap and sucks out all the genetic code, resulting in a ‘DNA soup’ that can be scanned using a reference tool, or database, of known DNA codes for hundreds of thousands of different insects or fungal species.

If a particular species was trapped, its DNA code will be present in the soup and flagged by the reference database, indicating its presence in the trap. These techniques have the potential to detect many targets in one test and pick-up biosecurity threats early, allowing for a more effective response to an incursion.

To further investigate the impact of this new diagnostics method and how it might work in the iMapPESTS surveillance system, a selection of insect samples from the sentinels are being processed at AgVic’s AgriBio using their HTS diagnostic method. The results can be accessed on the iMapPESTS website.

Alongside the deployment of sentinel 4 to Thorndon Park Produce in October 2020, a new-look iMapPESTS website was launched. The new site includes an interactive map of locations for current and previous sentinel trials that will take you to individual trial pages where stakeholders can interrogate the data collected for insects and pathogens trapped at a particular site.

During sentinel trials, data is regularly shared through these pages as summaries and observations from iMapPESTS entomologists, plant pathologists and local service providers (crop consultants, agronomists, etc) and a data dashboard that features, weather (temperature, rainfall, and humidity), pest and pathogen counts.

The iMapPESTS team will work with growers and industry representatives to understand the best way to communicate and visualise the dynamic pest and pathogen information for end-users. Growers and those involved in plant pest management are encouraged to visit the iMapPESTS website for more information or to get in touch.