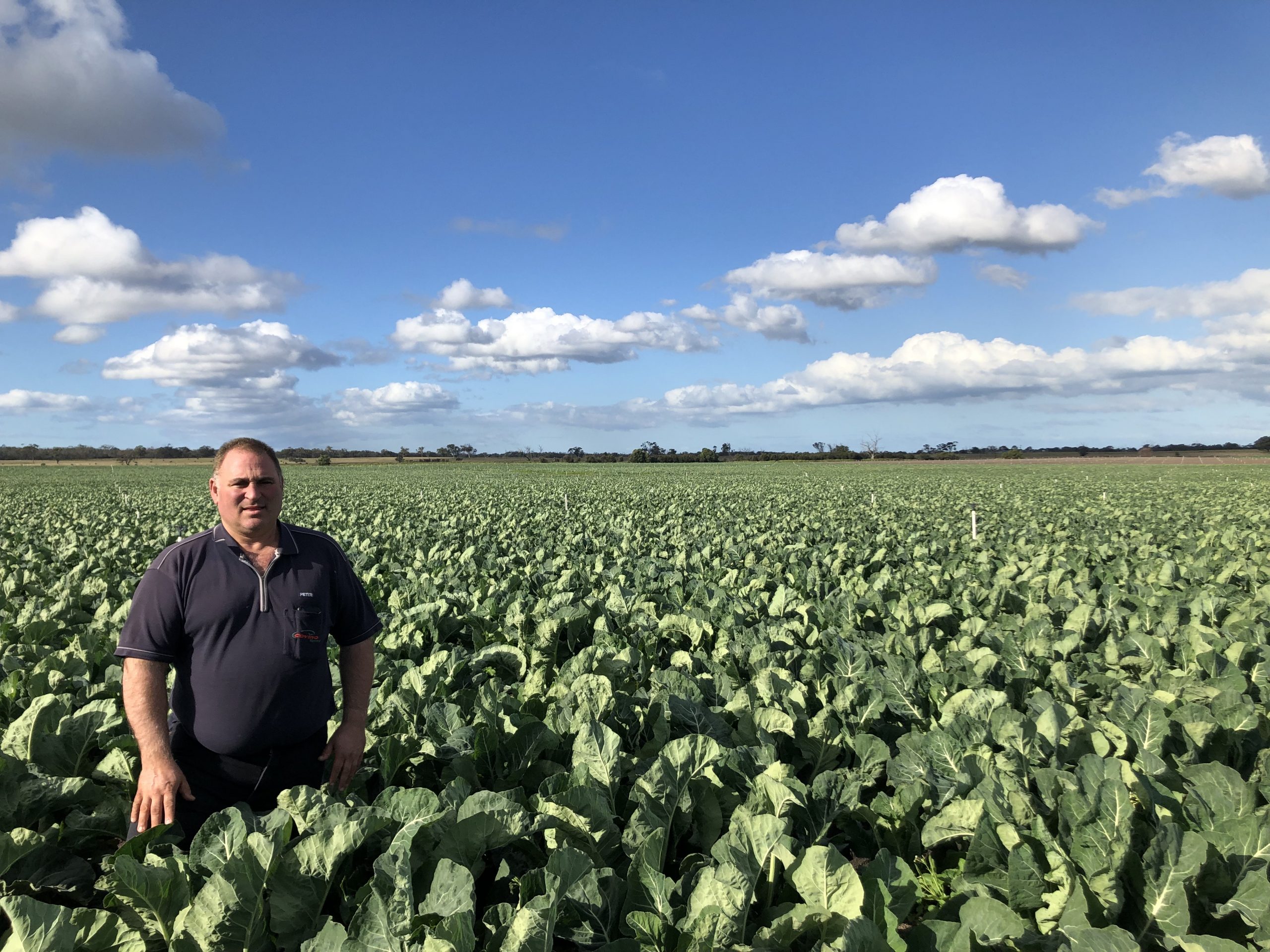 In this article, vegetable grower Peter Covino (pictured in main image) from Covino Farms in Victoria’s Gippsland region discusses his approach to controlling aphids in broccoli, cabbage and cauliflower crops, with promising results recorded so far.

Covino Farms is one of the country’s leading fresh salad and vegetable producers, consistently meeting and even exceeding customer expectations.

The family business is based at Longford in Victoria, where it grows a wide range of crops – including leafy green vegetables, carrots and a range of brassicas – on 3,500 acres. Supplying a large customer base with such perishable produce takes a combination of exceptional quality assurance and constant innovation. The recent addition of Versys® Insecticide from BASF to their spray rotation helps on both counts.

One of the more predictable challenges the Covinos face is dealing with heavy aphid pressure – especially from cabbage aphids – in autumn. The feeding damage aphids cause is often the lesser of two evils compared to their role as a vector of disease as Sally Douglas, a trainee agronomist from E. E. Muir & Sons at Lindenow, points out.

“They’re such a bad pest for transfer of disease. You need to shut them right down to prevent the crops getting infected,” Sally says.

Late in 2019, Sally introduced Peter Covino to Versys as a new option for aphid control. Peter soon noticed a difference in the speed of control compared to other products they use.

“With this product, we see a quick response and that certainly helps. We soon know we have the aphids under control. Other products may get the same kill rate, but it takes longer,” Peter says.

Covino Farms has been successfully using a range of BASF products for years, and applied Aero to control early blight on their tomatoes in early 2020. Peter agrees that the company’s reputation plays a part in his business’ willingness to test out its new products.

“Obviously knowing that it’s coming from a major manufacturer gives us confidence to try something new,” he says.

“But at the end of the day, this product speaks for itself.”

Both Sally and Peter are particularly impressed by how much cleaner the Versys-treated brassicas are at harvest. As all growers know, crops such as cauliflower are especially vulnerable to contamination because the carcasses of controlled pests can get trapped within their heads.

Sally explains that the effect of the product on the aphids’ nervous system means far fewer of them stay on the crop.

“They do that little dance and fall off the leaf, which prevents foreign body contamination at harvest,” she says.

According to Peter, the crops are cleaner.

“The cabbages are trimmed, so they’re not such an issue, but it’s particularly noticeable in the cauliflowers and broccoli,” he says.

Peter and his team are able to take full advantage of that reduced contamination risk, because they are predominantly using Versys towards the end of each crop cycle.

As a less toxic product used at a lower rate than some of the alternatives, it can be used up to four times in each crop and has very short withholding periods. In the future, Covino Farms may consider applying the product at least once on the younger crops when limiting the risk of disease transmission can prevent greater potential damage.

The one-day withholding period in brassicas for new chemistry is a big advantage for Peter in the current spray program.

“We use different chemical groups as much as possible to avoid relying on the same mode of action, so introducing new chemistry is always good,” Peter says.

“At the moment, we’re targeting this more towards the end of the crop. Harvesting cleaner produce lessens the risks of rejection and customer disappointment; it’s really important for us to meet customer expectation.”