Maddie’s Month: How tomatoes and capsicums are making a big difference to patients’ lives 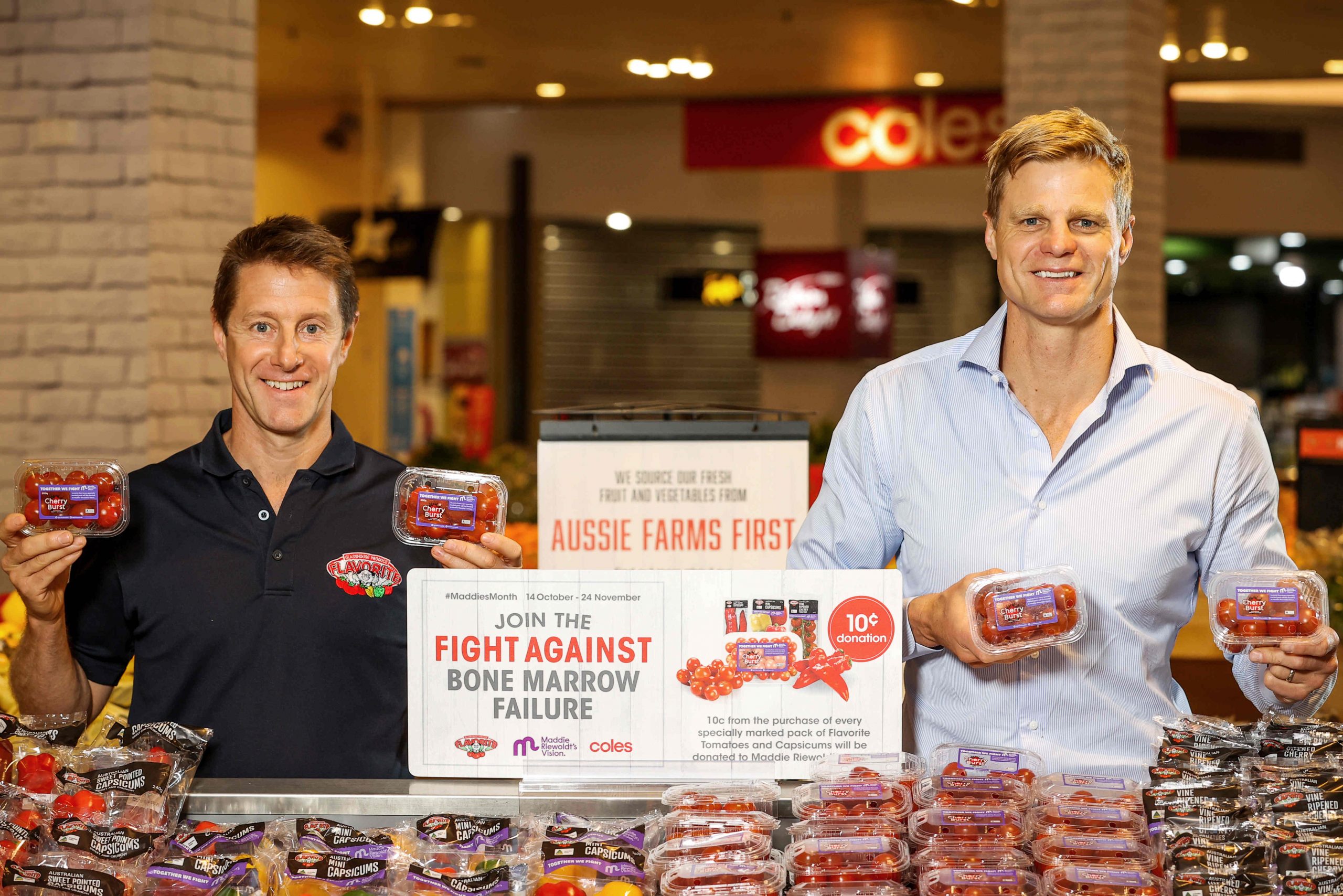 This November, Australians can make a big difference to people with Bone Marrow Failure Syndromes just by popping a bunch of Flavorite tomatoes or capsicums in their weekly shop at Coles.

November is Maddie’s Month — a partnership between Flavorite, Coles and Maddie Riewoldt’s Vision that has already raised over half a million dollars for vital research into Bone Marrow Failure Syndromes, a group of devastating conditions that mainly affect children and young adults.

Maddie Riewoldt was just 26 years old when she passed away after a brave five-year battle with a Bone Marrow Failure Syndrome called Aplastic Anaemia. Before she died, Maddie made her wish clear: that no one would go through what she had.

Maddie’s Month was the brainchild of Flavorite co-founder Mark Millis who personally battled blood cancer and so understood the urgent need for medical research to find more effective treatments.

Sadly, Maddie and Mark are no longer with us, but their families fiercely and proudly continue their legacy.

Named in honour of Maddie’s mum Fiona Riewoldt, this research Fellowship recognises the vital role nurses and allied health staff play in supporting and caring for patients during often prolonged hospital stays, including periods in ICU and undergoing multiple treatments.

Fiona’s words: “I am thrilled that this vital area of care is being supported! To know that we can fund vital research into patients’ needs is very comforting. No-one really understands the impact of these diseases and the horrendous side effects of treatment, unless they are living it.”

“I firmly believe this Fellowship presents the opportunity to vastly change lives and outcomes for all those suffering, just as Maddie wished.”

Nick Riewoldt, Maddie’s big brother and Chair of Maddie Riewoldt’s Vision, said the support from Flavorite and Coles will raise much-needed funds to help patients in the future.

“Sadly our two families know what it is like to lose someone you love, so together we are fighting towards finding a cure for Bone Marrow Failure Syndromes. We’re hoping to raise $100,000 this November. Please jump on board, buy some delicious tomatoes and capsicums and make a big difference!”

Flavorite’s Chris Millis said, “We are really excited about this year’s campaign and the extended Millis family is so grateful for the immense support from the community and Coles.”

“My dad, Mark Millis, started the Maddie’s Month campaign with Coles and Maddie Riewoldt’s Vision in 2016 to raise much-needed funds to find a cure for Bone Marrow Failure Syndromes. We would like to thank every Coles customer who has picked up a

pack of our tomatoes and capsicums.

These small actions are supporting Australian farmers like us and making a huge difference in patient’s lives.”

“By buying Flavorite’s specially-marked packs of tomatoes and capsicums in November, customers are not only buying delicious, fresh produce but they’re also supporting an important cause,” he said.

Australians purchasing Flavorite tomatoes and capsicums at Coles have had a huge impact already. Funds from previous Maddie’s Month campaigns have:

• Supported the launch of the very first Australian Marrow Failure Biobank to collect and store tissue samples that are critical for research into new treatments for Bone Marrow Failure Syndromes.

• Funded a 3-year research Fellowship at the Peter MacCallum Cancer Institute that made new discoveries in the search for novel treatment avenues.

For every pack sold at Coles during November, 10 cents will go towards helping to find better treatments and cures for young Australians diagnosed with bone marrow failure.

People who purchase a pack will also be able to enter a competition by QR code to win a kick of the footy with Nick Riewoldt, as well as many other great prizes, including a Sherrin football signed by Nick and Jack Riewoldt.

In simple terms, the bone marrow which is our blood cell ‘factory’, stops working, and the body is unable to produce healthy blood cells on which we depend. Around 160 Australians are diagnosed with Bone Marrow Failure Syndromes each year. Distressingly, most of them are children and young adults. Thousands more are living with ongoing complex health issues. 15 per cent of patients will develop blood cancer.

Maddie Riewoldt’s Vision is funding the vitally important research needed for breakthroughs in the treatment of Bone Marrow Failure Syndromes.