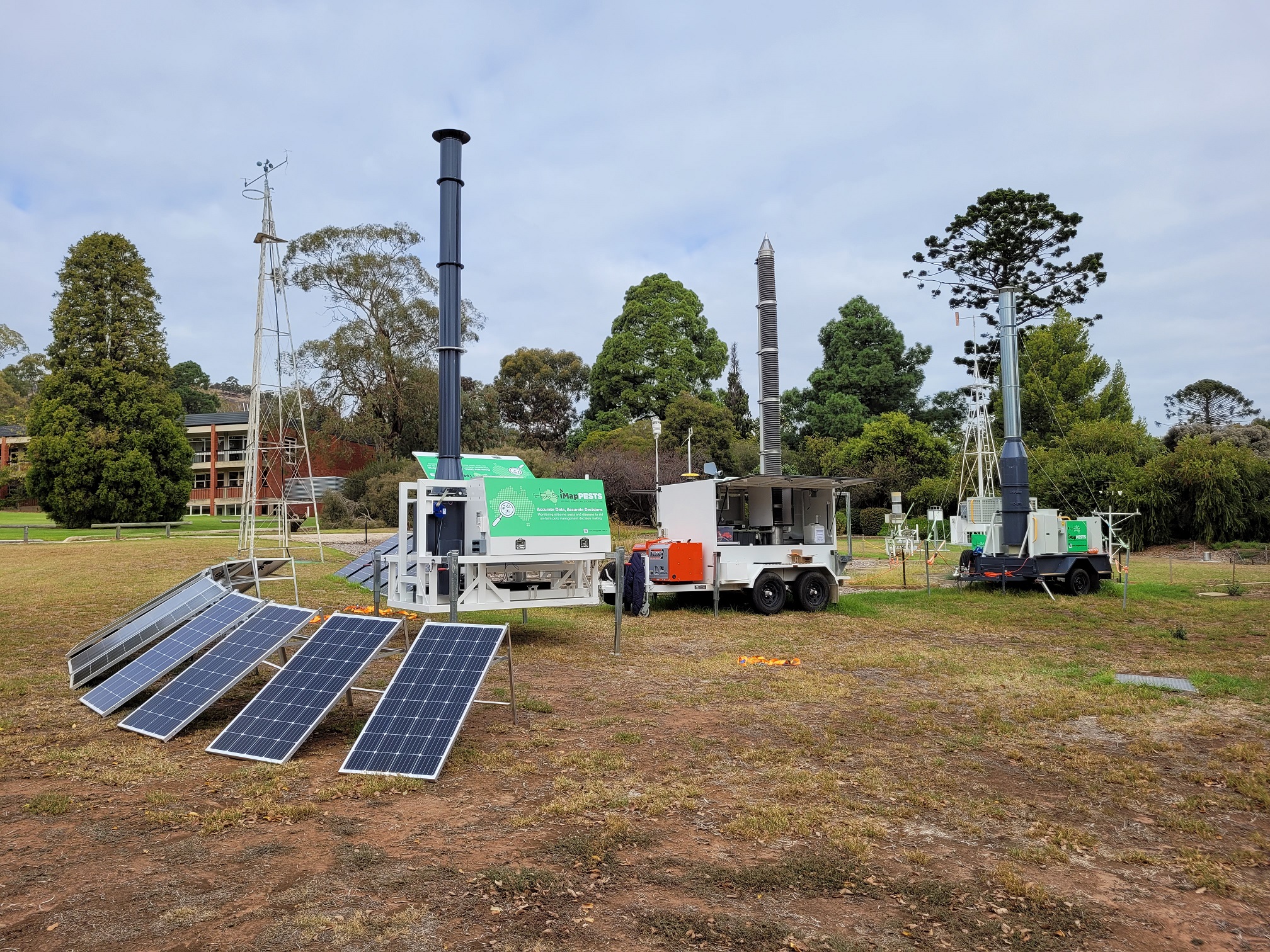 iMapPESTS is a five-year project that aims to provide a framework for a plant pest surveillance system that can rapidly monitor and report the presence of high-priority airborne pests and diseases. With six mobile surveillance units constructed so far, the cross-industry collaboration is now in the final stage of the proof-of-concept R&D program. A focus on in-field trials will see the units showcased at a range of industry events and trials in diverse growing regions as the program seeks to understand how the suite can improve pest management for industry. Shakira Johnson provides a project update.

A suite of custom-designed mobile surveillance units – known as ‘sentinels’ – that feature sophisticated airborne trapping technology are being deployed to various locations around the country to monitor high-priority airborne pests and pathogens. These sentinels sit at the core of a cross-industry R&D program, iMapPESTS: Sentinel Surveillance for Agriculture program, bringing together Australia’s plant industries to research and develop a smart national surveillance system with the latest cutting-edge diagnostics to rapidly monitor and report the presence of airborne pests and diseases for multiple agricultural sectors, including viticulture, grains, cotton, sugar, forestry and horticulture.

Every sentinel looks unique but all six share similar features – each is equipped with several airborne samplers, power supply, a weather station, telemetry and an industrial computer for remote control and monitoring. They also include automated technology to configure samplers for different sampling requirements.

The most recent additions to the iMapPESTS smart surveillance suite, Sentinels 5 and 6, were first launched in a brief trial at Scott Samwell’s Eastbrook Farms in the Adelaide Hills township of Nairne, with on-ground assistance from E.E. Muir & Sons’ agronomist Rhys Robinson.

These two units, along with Sentinel 4, make up the next generation of optimised surveillance units and are smarter, smaller, lighter, and more flexible compared with earlier sentinels, an important feature in an ever-evolving industry, and especially important for responsiveness to biosecurity incursions.

As iMapPESTS nears the end of the sentinel development stage, a focus on in-field trials will enable the iMapPESTS team to engage with growers, agronomists and consultants at the coalface of the growing regions. This will deliver important pest and disease information that can contribute to on-farm pest management actions, biosecurity response efforts and area freedom claims.

Throughout the remainder of 2021, these six sentinels will be deployed around the country to different growing regions for extensive testing and optimisation. The roadmap of sentinel trials will include showcases at several industry events, including a demonstration at the Hort SA conference at Adelaide Produce Markets in mid-May. Industry has been excited to get up close and see how the moving parts come together to deliver information they can use to guide crop monitoring efforts. Hort Connections attendees will get a chance to see the newest six-metre trap in-person at the event’s Trade Show, where they can stop by and have a chat to the researchers behind the construction of the units. Hort Connections will be held at the Brisbane Convention Centre from 7-9 June.

To stay up-to-date with locations and news for sentinel trials, visit the iMapPESTS website where you can view each of the sentinel units and trial pages. During sentinel trials, data is regularly shared through these pages as summaries and observations from iMapPESTS entomologists, plant pathologists and local service providers (crop consultants, agronomists, etc) and a data dashboard that features, weather (temperature, rainfall, and humidity), pest and pathogen counts.

The iMapPESTS team will work with growers and industry representatives to understand the best way to communicate and visualise the dynamic pest and pathogen information for end-users. Growers and those involved in plant pest management are encouraged to visit the iMapPESTS website for more information or get in touch.

Cover image: From left to right: Sentinel 5, Sentinel 1 and Sentinel 3 testing at The University of Adelaide’s Waite Campus. Image courtesy of Andrew Baker from Data Effects.