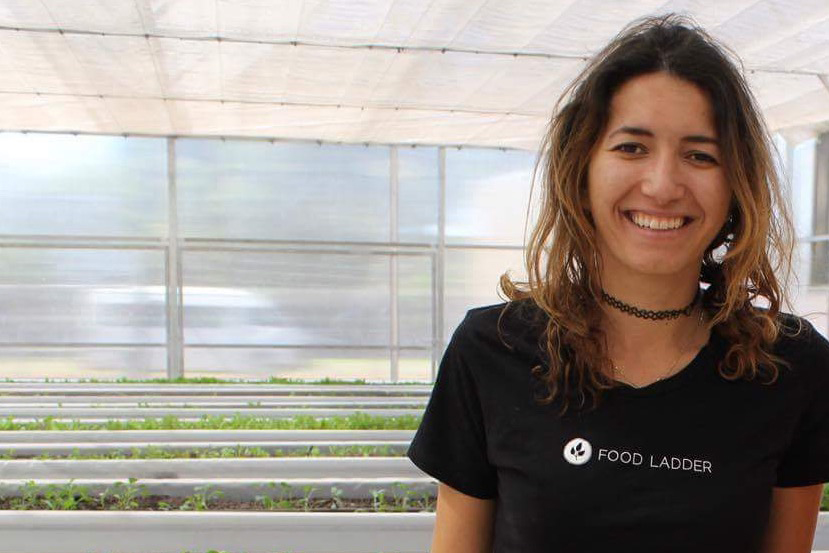 A French-Lebanese native, Lina Challita is a worldly and well-travelled woman who plays an active role in the Food Ladder program based at Katherine in the Northern Territory. Food Ladder aims to increase the consumption of fruit and vegetables in the local Indigenous community by providing an opportunity for residents to actively take part in the growing process. Lina spoke to Vegetables Australia about the community development projects currently being undertaken.

According to the 2008 report, Health and Welfare of Australia’s Aboriginal and Torres Strait Islander Peoples, 15 per cent of Indigenous people living in remote areas had no usual daily intake of vegetables, as compared to their non-remote Indigenous counterparts (two per cent).

It is stark figures like these that have led to programs such as Food Ladder to be established. Food Ladder is a social enterprise for Indigenous communities around the Northern Territory. At the moment, the program is focusing on building greenhouses to provide fresh vegetables in those communities.

Lina Challita is Food Ladder Hydroponics Manager, and her role involves helping with the construction of the greenhouses, managing the hydroponics system and providing greenhouse training to various community groups.

Lina explained the reasons behind the establishment of the greenhouses.

“Food Ladder has so far worked in East Arnhem, where most of the vegetables come from down south (for example, Adelaide) and they have to be transported all the way up to Darwin,” she said.

“From Darwin, they are sent to the remote communities and by the time the fresh produce gets there, it’s 2-3 days before it goes off. The quality is really bad, so we’re providing a solution to that.

“Through the greenhouses, we work on community development projects to train people on how to grow produce, where the produce comes from, how to manage the greenhouse and how to grow everything from start to finish.”

The program’s first aim is to grow fresh produce that is accessible to local communities. The second aim has a more nutritional approach – to get people more involved in where their food comes from, and encourage them to eat green vegetables.

“We’re also starting to get kids involved through the local schools,” Lina said.

“For example, our project in Katherine has students from Katherine High School come for regular field trips and they visit the greenhouse. They help harvest and plant seeds. I personally train them about how plants grow and what they need in order to produce good quality veg.”

"The greatest outcome is their enthusiasm. Those people who are working on the greenhouse as part of the community development project are encouraging other locals and their family members to come in, check it out and try the produce. We’re handing out small cooking recipes on how they can use the vegetables at home. Word is spreading, and people are curious."

In addition to her projects with children in both Katherine and East Arnhem, Lina is working with the Katherine Indigenous Women’s Association on how to run the Food Ladder program.

“We’re helping the Katherine Indigenous Women’s Association to become a business. Personally what I’m doing is working on the greenhouse and training them to run it, as well as helping them with sales of the produce and how to manage the finance linked to the greenhouse – the much bigger picture,” Lina said.

“They are a wonderful group of ladies who are really motivated and it’s getting them to run it all by themselves as a business. Their vision for the project is to be that kind of educational centre or community farm for people to come in and learn about nutrition, learn about where food comes from and eventually buy the fresh produce.”

Lina loves working in remote communities, particularly in areas that typically require a permit for work purposes and therefore do not allow tourists to visit.

“It’s such an experience. I get to go to places where most people don’t have access to, be close to that culture and learn and connect with those people who don’t really get to meet a foreigner –that’s the most exciting part,” she said.

Food Ladder’s aim for the Northern Territory project is to build more greenhouses to create fresh food sources in those areas and generate more community engagement in the process.

The program has already had a profound effect on these communities.

“They are very proud of what they’ve achieved. I was there throughout the whole first cropping season, working with a group of 10 men who are participating in the community development project,” Lina said.

“The greatest outcome is their enthusiasm. Those people who are working on the greenhouse as part of the community development project are encouraging other locals and their family members to come in, check it out and try the produce. We’re handing out small cooking recipes on how they can use the vegetables at home. Word is spreading, and people are curious.”