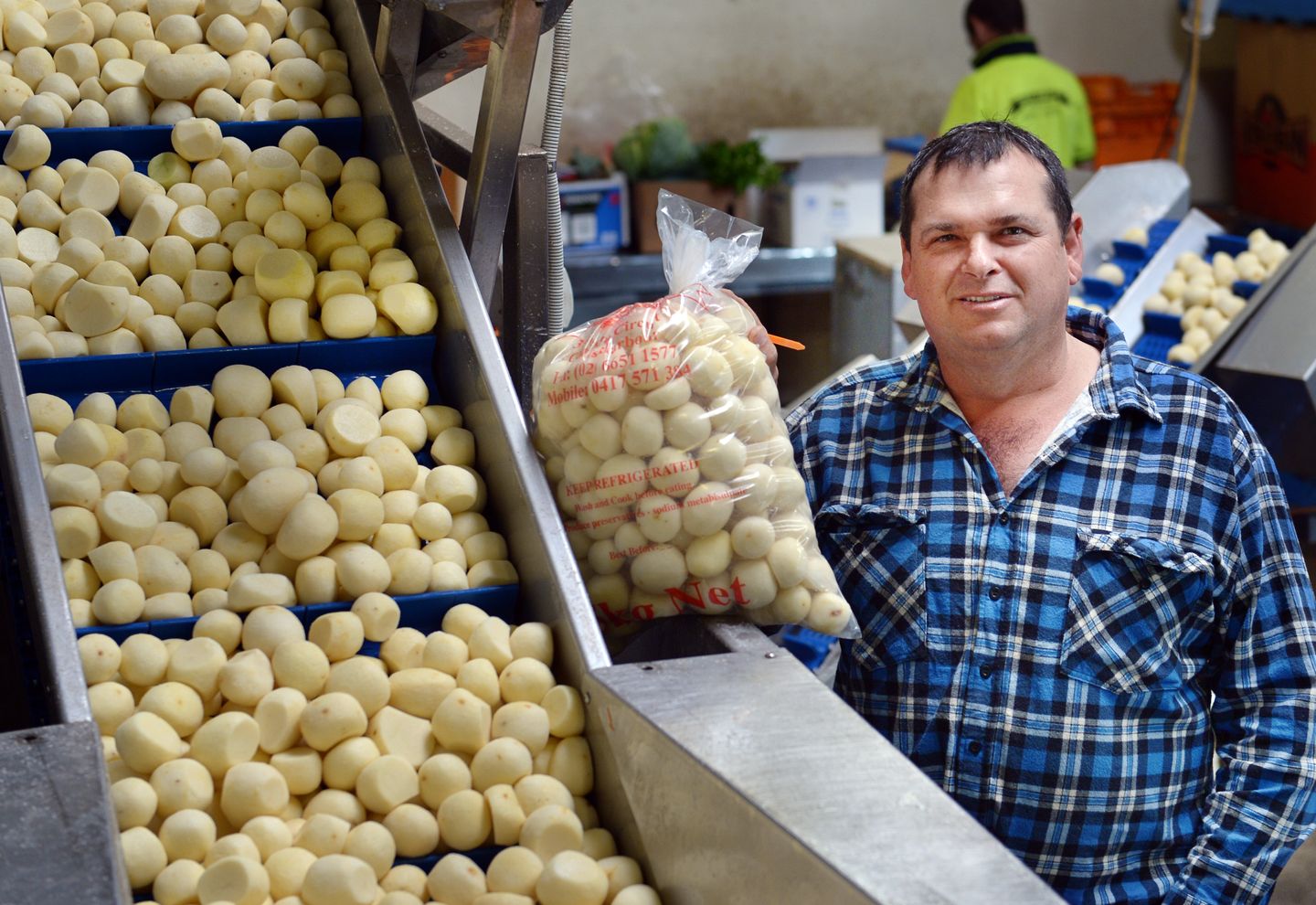 Over the past 20 years, Chris Gibbins has progressed from a small fruit and vegetable shop owner in Sawtell, New South Wales to a potato grower, transport operator and wholesaler, working with local businesses and growers along the eastern seaboard.

The agriculture and horticulture industries often talk about the “paddock to plate” experience – discovering where our food comes from and how it makes its way to the table.

Witnessing this process on a daily basis is New South Wales potato grower Chris Gibbins. Over the past 20 years, Chris and his wife Christine have gone from owning a fruit and vegetable business in Sawtell, a little village south of Coffs Harbour on the north coast of New South Wales, to overseeing three intertwined businesses: the growing operation C&C Gibbins, interstate truck and trailer company Gibbins Refrigerated Transport (GRT) and Tutti Frutti Wholesale in Coffs Harbour.

Chris grows 60 acres of Sebago potatoes in Dorrigo, a town located on the Northern Tablelands of New South Wales. These are harvested and transported down the New South Wales coast using Chris’ trucks before being packed and sorted at a farm in Bonville, south of Coffs Harbour. The potatoes are then sent to the Tutti Frutti Wholesale warehouse and processing facility, ready to distribute to consumers and businesses as needed.

While Chris is the Director of the businesses, he spends most of his time on the farm. There are three properties in Dorrigo, comprising beef cattle and potatoes as well as beans and pumpkin in-season.

“That’s my love – the farming side of things. Growing a crop is very satisfying,” he says.

Chris has an extensive background in farming. He grew up on a farm and worked on a Victorian vegetable growing operation, Bonaccord in East Gippsland, for 10 years before heading back to New South Wales to run the family business in Sawtell.

Sebago potatoes are grown because they are an ‘all-rounder’ that can be sold both fresh and processed. Through Tutti Frutti Wholesale, they are supplied to almost every business in the region, alongside a full range of fresh fruit, vegetables and herbs.

“We source whatever we can locally within the Coffs Coast area. We do buy direct off farms out of East Gippsland (Bonaccord) and Stanthorpe in Queensland. The produce that we can’t source directly, we’ll get out of the Brisbane Market,” Chris explains.

Chris started his transport company 10 years ago with one truck running up to Brisbane and Stanthorpe from the farm.

“Our main aim when we started was to just bring produce back from Brisbane, but we’ve gotten to the stage where we have a daily service to Brisbane and Sydney, into the markets. Most of the freight is blueberries, bananas and cucumbers.”

There are now six trucks in the GRT fleet, reliably connecting Tutti Frutti Wholesale with growers and markets along the east coast of Australia.

“We’re doing the full deal from paddock to plate, straight to the consumer. It’s vertically integrated: we can control it, we can see it, we can dine out in Coffs Harbour or Sawtell and know we’re eating our own product, which is pretty satisfying,” Chris says.

“We supply everyone from IGA to the smallest café; restaurant through to big clubs; hospitals; nursing homes; jails – any institution that uses fruit and vegetables.”

The only time Chris puts his potatoes into the market is in December/January. This is to fill the gap in supply between Atherton in north Queensland and Thorpdale in Victoria. For rest of the year, any older or misshapen potatoes are peeled and processed on-site at Tutti Frutti’s processing facility.

"We’re doing the full deal from paddock to plate, straight to the consumer. It’s vertically integrated: we can control it, we can see it, we can dine out in Coffs Harbour or Sawtell and know we’re eating our own product, which is pretty satisfying."

There are many challenges growers face and Chris is no different, with disease control one of the major issues on his farm. Potato blight has a tendency to appear as the weather can be wet and humid, providing ideal conditions for the disease.

In addition, rising costs are a challenge, particularly in irrigation. This has meant Chris has had to implement more efficient systems with pivots to lower the pressure, thereby reducing energy costs.

To overcome increasing labour costs, Chris has invested in mechanisation. In the past two years, he has invested in a new two-row planter and new harvesters as well as adopted precision farming practices such as GPS guidance and automatic controlled spraying.

Despite these challenges, Chris has plans to expand the farm and he sees a bright future for the potato industry.

“I can see us growing more potatoes. There seems to be a fair exodus of growers in the Dorrigo area in the last 15 years and because of that, there is definitely a gap in the market in December/January (the changeover of the seasons from north to south), and currently in the winter there is a gap as well,” he says.

The future of C&C Gibbins is also looking bright. Chris and Christine have four children, two boys and two girls.

“Currently the two boys are doing apprenticeships but I can see them one day returning to the farm – they just love it. It’s something that it’s in your blood. And the girls don’t mind it either – I think it’s a great lifestyle,” Chris says.

Chris has certainly worked hard over the past 20 years to build not just one business, but three thriving interlinked operations that have a wide reach along the east coast of Australia. It is something that he is rightfully proud of.

“From our business growing from a small shop in Sawtell, with just myself and my wife who used to run it, to three businesses now with 20 staff… it has just been slow growth over 20 years. That’s pretty satisfying,” he said.

“It’s hard work but it’s rewarding in the end. I think you’ve got to put the hard work in yourself. It’s all about customers – whatever the customer needs or wants, you do: provide service to the customers.”