Growers are faced with record prices for cost of production, yet there remains virtually no movement on price at the retail level. Growers are continuing to bear the brunt of global trade conditions with rising chemical, fertiliser, fuel, lumber and labour costs without any relief in price from buyers. Below is a snapshot that AUSVEG has compiled detailing these global economic conditions.

AUSVEG is calling on retailers and buyers to ensure that farmgate prices that growers receive for their produce better reflect the current economic climate to ensure the financial viability of vegetable and potato producers.

These major commodity increases have been escalating for some time and are creating challenges right the way through the agricultural sector. However, the fresh produce industry is feeling the cost pressures more than ever before.

Many agricultural commodities are experiencing record prices, a reflection of what is happening on the global market. APW Wheat is at near record levels, as is the price of Canola, the Eastern Young Cattle Indicator (EYCI) has smashed through 1100c/kg despite being at record levels five years ago at almost half that.

Our agricultural neighbours are feeling the farm input rises just as much as our vegetable and potato growers, yet they have been able to offset that pressure with high prices of their own.

However, work by AUSVEG over the last few weeks has discovered that the vegetable retail price in Australia has remained relatively stable, despite significant increases in the cost of production.

What this means is clear – growers are taking the hit!

AUSVEG has analysed retail pricing data – as that is what is available – and it tells a compelling story.

In a period where major weather events have damaged crops in key production regions across the country, growers are also not only dealing with the increased farm input costs, but navigating worker shortages, quarantine costs, increased freight prices and border closures which all add to the total cost of production for growers.

As shown by the graph above, the cost of vegetables per kilogram has remained steady for the past two years. This data is inclusive of all retail including major, independents, greengrocers, and specialty stores.

If vegetable and potato prices reflected the 40% + input increases grower are facing, the average price of vegetables would be $7.00/kg, but this is not reflected on supermarket shelves.

The data collected was sourced from the Hort Innovation-funded Harvest to Home database, which captures the retail price and it proves that the cost-price squeeze on growers is real.

At a time when demand should be at its peak for fresh produce, the Australian consumer needs to understand the pressures growers are facing in this challenging market and the retail price needs to reflect what is happening in reality.

The reality is growers are feeling more than just a squeeze but are being put under significant pressure which is casting doubt on many businesses short and long-term viability.

AUSVEG will continue to raise these issues to the relevant stakeholders to ensure the message is heard that growers need and deserve a fair price this Christmas.

AUSVEG calculation based in part on data reported by NielsenIQ through its Homescan Service for the Vegetables category for Total Australia, according to a client defined product hierarchy. Copyright © 2021, Nielsen Consumer LLC.

Rising input costs – what’s it come down to?

Coal and gas are the feedstock to make fertiliser. With global energy shortages many countries have cut back production in several industries and communities. Many fertilisers and chemical factories have been forced to stop or limited production due to cost of inputs. 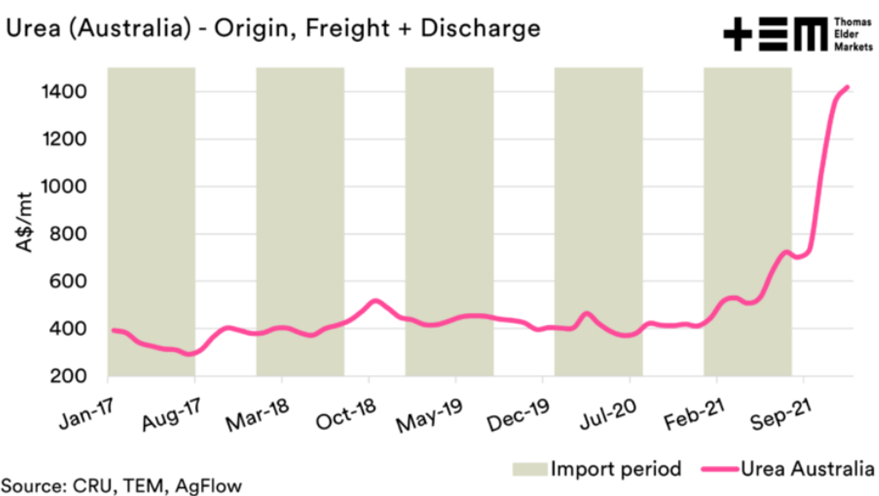 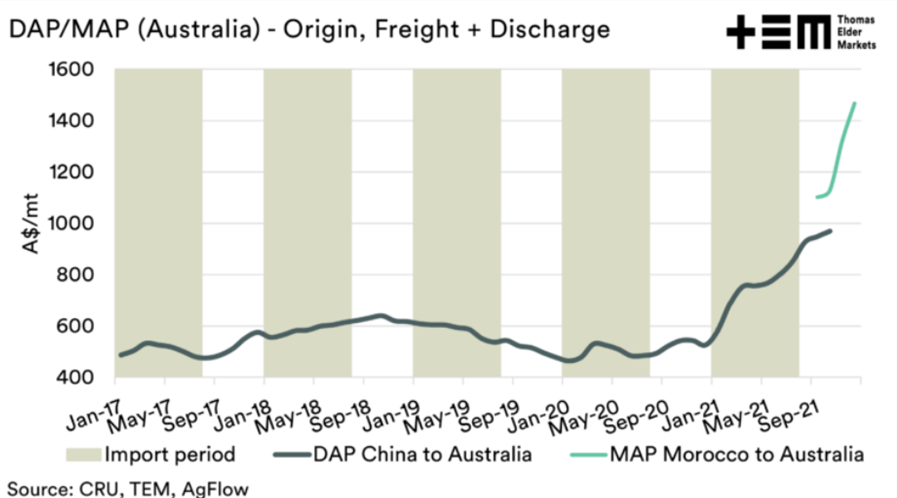 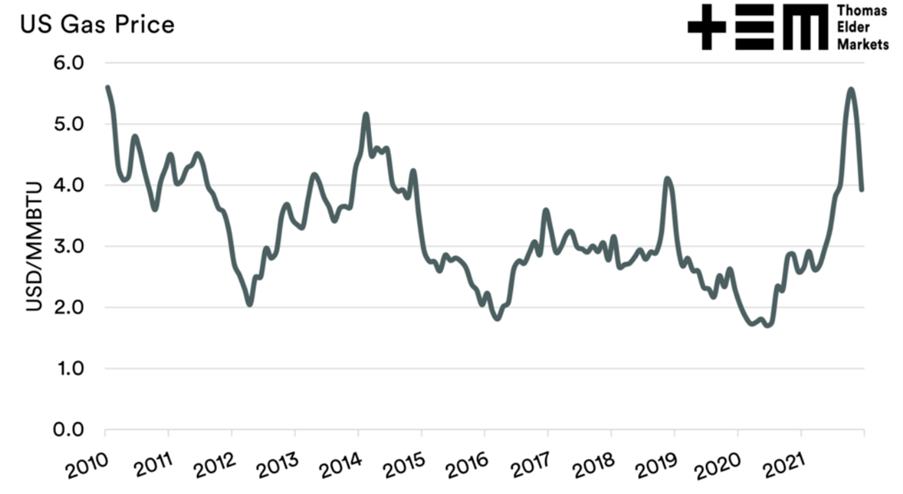 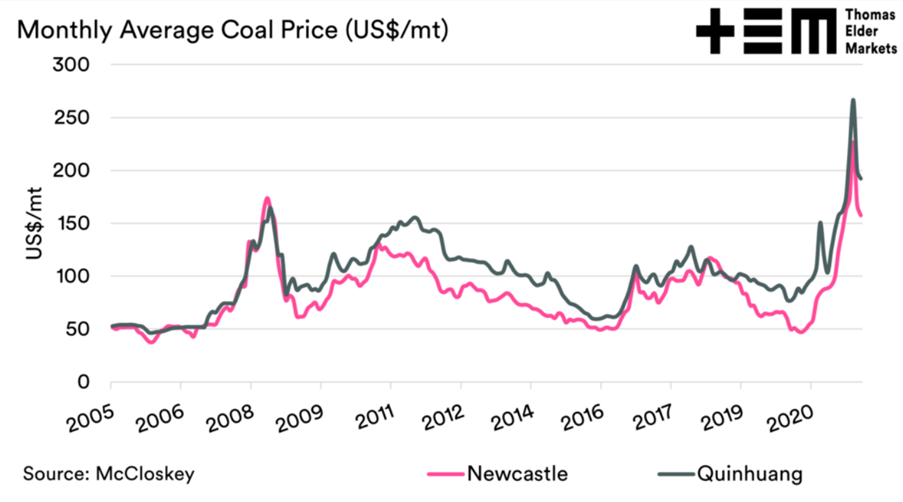 The graphs above show the peaks in prices of US Gas and Coal in Newcastle and Quinhuang during the pandemic period. However, you may also note that the prices have dropped since that peak. Whilst they still remain high, it is a good sign that this decrease will have flow-on effects to fertiliser prices.

There are several factors that have changed the exports coming out of China. One factor is that China has decreased their fertiliser export to reduce domestic fertiliser costs for local farmers. The increased fertiliser locally will increase production and yield therefore drive local food prices down. China is also banning exports and sending containers to more profitable markets.

Freight costs have skyrocketed due to increased movement and purchasing of products from online sources over COVID. In addition to strikes, outbreaks, and congestion at ports.
Hear more from Thomas Elder Market experts below:

The shortage of AdBlue is generating fears Australia’s transport industry will stop.

AdBlue is a fuel additive in diesel machinery, including trucks, tractors and harvesters.

AdBlue removes the emissions from trucks exhausts, allowing them to comply with national emissions standards. The key ingredient, Urea is in short supply since China halted its production and restricting exports.

Read more about AdBlue shortages below:

Farm machinery shortages have left farmers waiting for critical equipment for up to 12 months. Whilst some of this can be attributed to shipping delays and port problems, the delays stem from third party supplier shortages, mainly microchips and rubber.

A typical 130-horsepower tractor requires over 1,000 semi-conductor microchips, which control everything from the headlights to the GPS navigation system. Microchip companies are still catching up on lost production after COVID lockdowns shut down the companies.

Rubber companies are dealing with the repercussions of an oversupply issue from a decade ago. During an oversupply of tyres, the company decided to plant less rubber trees, which has now caused problems with sourcing enough raw materials for production.

Down the line, ports are experiencing rolling outbreaks and protests over safety, roster, allocation and worker fatigue. Millions of dollars’ worth of new farm machinery had been held up at ports before being distributed.

Read more on the shortage of machinery parts below:

At the Green Fertiliser Round Table last month, stakeholders came together to discuss the opportunity to produce fertiliser in Western Australia. Cutting out the middleman and extra travel costs could stimulate and safeguard Australian agriculture.

Energy company in Western Australia, Strike Energy, is confident domestic manufacturing of clean, green fertiliser will provide a multitude of benefits including employment, and enhanced sustainability from lower emissions.

By reducing reliance on overseas producers and supporting local economy it will ultimately create a “win-win for farmers and the Australian community”.

Strike Energy has already drawn up plans for the world’s first green fertiliser factory which will reduce the carbon footprint of Australian fertiliser by over 60%.

See below for additional media reports:

The Incitec Pivot fertiliser factory at Gibson Island in Brisbane has announced it will be closing at the end of 2022 due to an inability to secure an economically viable a long-term gas supply. The closure of the plant will be another massive blow to the agriculture industry and the 170 employees of the plant.

Whilst this marks the end of gas fertiliser products, the company is looking into the potential to producing green ammonia in the future.

See below for more media coverage:

Wood is a huge input into the agriculture industry, used for fencing, wooded pallets, and boxes. The current shortages have been driven by the influx of home DIY projects undertaken in lockdown. This has been complemented by the supply chain issues.

The prices of timber are less than what they were at the beginning of the year, however they are still well above the average, as can be seen by the graphs below.

Read more on the Thomas Elders lumber report below: