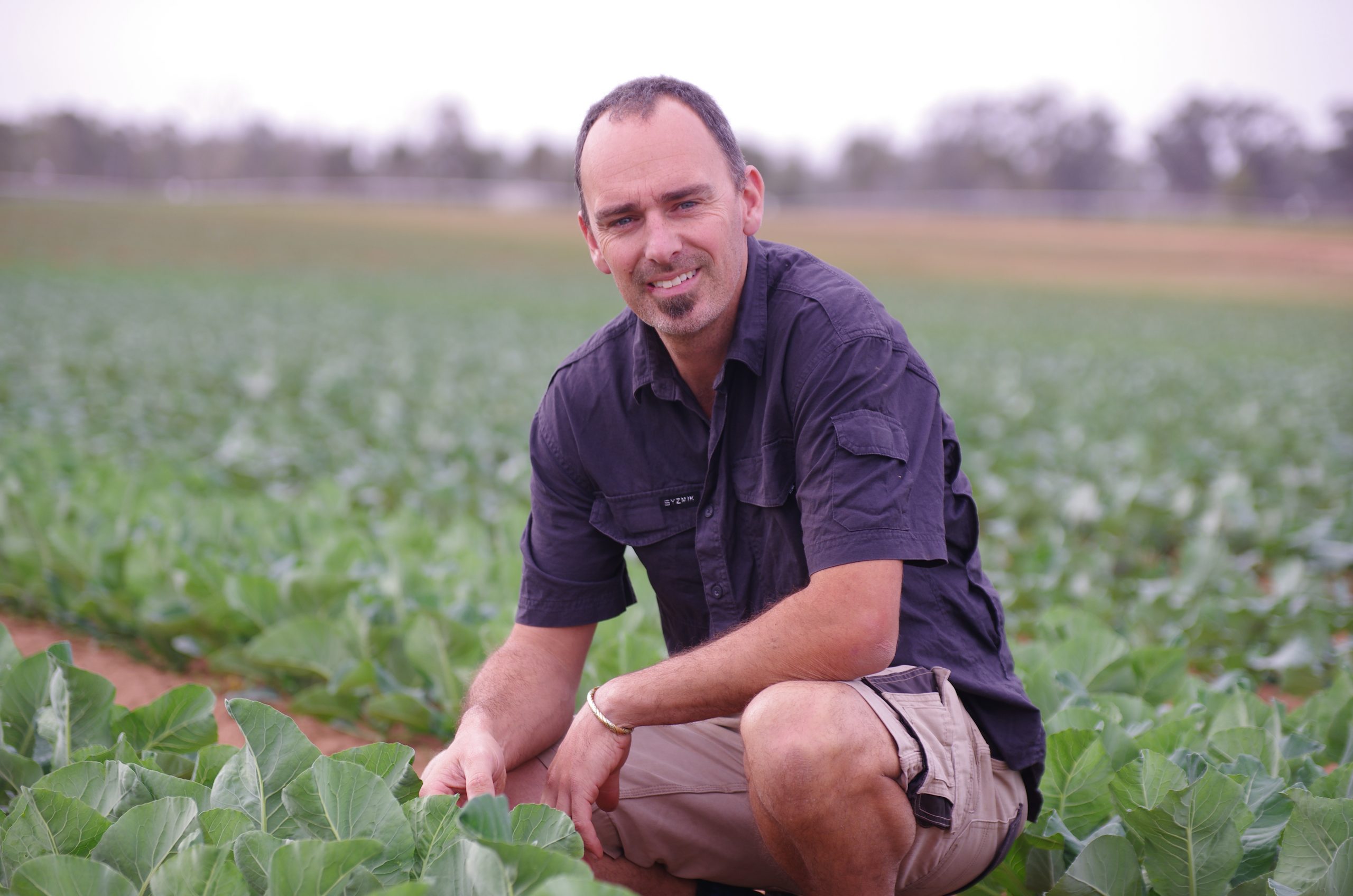 For around 20 years, Adam Farley was employed in fruit and vegetable growing operations in southern Victoria. Harbouring a lifetime ambition to run his own business, Adam purchased an old vineyard in Wood Wood, near Swan Hill, where he now farms 50 acres of organic vegetables. Michelle De’Lisle speaks to Adam about his foray into organic vegetable growing and the challenges he faces as a small operation.

Since he was a child, Adam Farley has been immersed in horticulture. Adam’s early days were spent on the farm with his mother, who grew herbs and edible flowers on Victoria’s Mornington Peninsula. In his late teens, Adam embarked on a wide-ranging horticultural career, which after two decades, has culminated with owning his own growing operation Murray Valley Organics.

Before establishing Murray Valley Organics, Adam worked in growing operations around southern Victoria including Hussey and Co, Sunny Ridge Strawberry Farm, Gazzola Farms, plus two stints with Coolibah Herbs. It was during Adam’s second stint with Coolibah Herbs that he and his family moved to northern Victoria after he accepted a job as Farm Manager at the company’s Wemen operation. Adam managed the Wemen site for four years, and then left the operation to undertake dryland farming. Over the following few months, Adam decided it was time to establish his own farming enterprise. He purchased an old vineyard in Wood Wood, which is located 35 kilometres north of Swan Hill, and Murray Valley Organics was born.

Establishing a business is never easy – especially when you’re on your own, as Adam explains.

“The physical work that I’ve had to put in to get to where I am just now… I’m exhausted, to tell you the truth. And I still know that I’m not there,” he says.

While he has always wanted to establish his own growing operation, Adam says there is a lot of pressure from working alone.

“My property is 120 acres and I probably only farm 50 acres of it. But to be that one-man band apart from having contract labourers to come in to do the harvesting for me, and then there’s all the paperwork side of things at the end of the day – it certainly takes your time up.”

While Adam has to focus on implementing measures to ensure his business remains viable, he would like to see the vegetable industry investigate production costs.

“I’d like to look at the costs that farmers face versus what we get for our produce, and who’s actually making the money,” he says.

“The biggest challenge is keeping the business viable. I know part of that is being a new business, but when you break it down and you look at all your input costs including water and labour, it’s a challenge.”

“I’d like to look at the costs that farmers face versus what we get for our produce, and who’s actually making the money."

Adam says the decision to establish an organic growing operation was an easy one.

“Most places I’ve worked have been involved in conventional farming, but the more exposure organics has received recently really hit home. That’s what I wanted to do,” he says.

“I don’t believe there’s a need to be heavily reliant on artificial inputs. I’m not saying that the products aren’t good or are good – a lot of them probably are good, but it didn’t align with me.”

Adam believes the challenges that are faced by conventional and organic growers are the same, but it’s way the issues are handled as they arise that is different.

“Conventional farming means you can use pretty well any practice you want as long as you’re within the guidelines. But with organic, you’ve got to think about what you’re doing. It can come down to knowing your crops in your climate and being very preventative in what you do,” he says.

“We’re lucky in this very dry climate. I know a lot of other people in organic areas that are coastal and humid may suffer a lot more disease problems than what we would.

“Where we are is generally safe for what I grow. A rain event can drive humidity up and, in turn disease pressures, but compared to southern Victoria, the disease pressure on crops is a lot less up here.

“But that’s not to say that they are not there. You definitely need to plan more and be more aware of what’s happening – you can’t just rely on the attitude of “this is what we’ve always done”, and you’ve got the chemicals to get you out of trouble.

Adam takes precautionary measures based on the weather, including temperature, humidity and wind speeds, and he will act if necessary.

“I only sprayed twice last year for diseases and have had no disease problems on my farm. I was proud of that,” he says.

“I think it was due to inputs. I do a lot of fertigation and put a lot of seaweed and kelp into the ground. I’m a big believer in keeping the soil healthy, and try to use a lot of those natural products to get the crops over the line.”

Adam’s biggest career achievement is establishing his own business in the current climate, but he is not looking too far into the future as he tries to secure long-term sustainability.

“I’m probably looking at introducing one or two more lines and work myself up to somewhere between 8-10 different crops that would get me through the year,” Adam says.

“Only growing zucchinis during summer is a risk, especially if something went wrong with the crop. My ultimate goal is to secure customers for the summer and winter growing programs and cement consistency and established seasons.”

Helping Adam with his newly-established business is Rick Butler from Butler Market Gardens. Adam and Rick have been friends for over 20 years, and the businesses joined forces in 2018 in winter and spring. It has been a successful partnership for both parties as they continue to increase production.

“Rick gave us a start, and we grew some herbs for him to help fill a gap in the season. That now extends into broccoli, cauliflower and zucchini,” Adam says.

Meanwhile, Adam’s exposure to many different growing operations throughout his career has had a positive impact on his new venture. But if there is one thing that he has learnt over the past 20 years in horticulture?

“Don’t cut corners and do it properly the first time.”

This grower profile first appeared in the leading magazine for the Australian vegetable industry, Vegetables Australia. If you’d like to subscribe to receive a new edition of Vegetables Australia in your mailbox every three months, use our online subscription form!