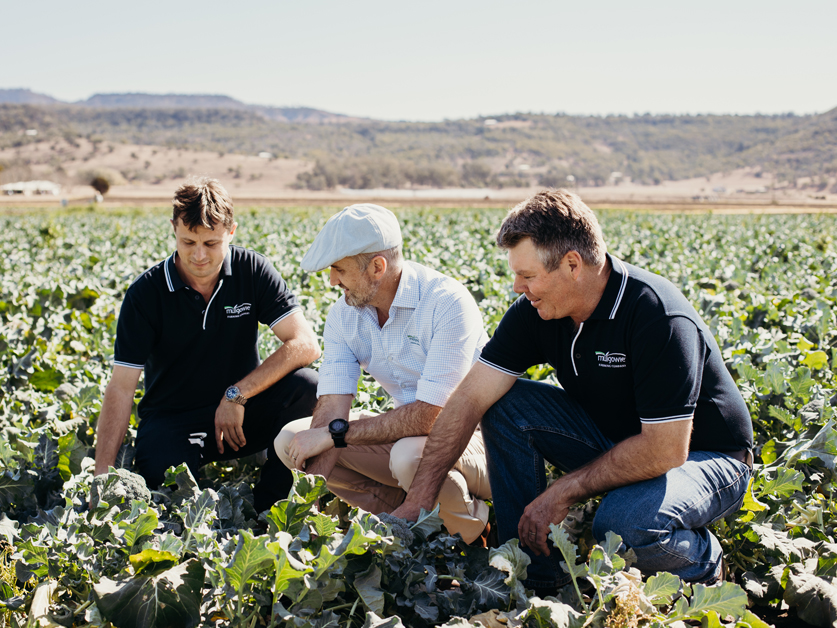 Opening the doors to a sustainable farming future

Andrew Johanson has worked at Mulgowie Farming Company for over 20 years and during that time, he has reaped the rewards of being involved in vegetable levy-funded research and development projects. Michelle De’Lisle speaks to Andrew about the activities he has been involved in, and the positive impact that they have had on the growing operation.

Andrew Johanson enjoys a varied role at Mulgowie Farming Company. As the operation’s Sustainable Farming Practices Manager, he focuses on a range of different aspects of the farms, from vegetable supply forecasting to building soil health.

Andrew also coaches the farm’s agronomists and managers on innovative farming methods and strategies that align to building healthier soils and delivering healthy plants that can be more resilient, high in quality and yield and, ultimately, have increased shelf-life.

However, achieving these goals requires guidance and gaining knowledge from external sources. Andrew has been involved in vegetable levy-funded research and development projects that have proved valuable not only his own role, but for the wider growing operation.

Andrew’s sustainable farming journey began in the early 1980s, when he worked with his father on the family farm. He then progressed to an agronomy consultancy role in the Lockyer Valley in the early 90s before joining Mulgowie Farming Company in 1996.

Since then, Andrew has been involved in Integrated Pest Management research and understanding beneficial insects and, most recently, projects in precision agriculture, soil wealth and cover cropping projects.

Over the past year, Andrew and Mulgowie Farming Company have been involved in a project entitled Optimising cover cropping for the Australian vegetable industry (VG16068), a strategic levy investment under the Hort Innovation Vegetable Fund that is led by Applied Horticultural Research scientist Dr Kelvin Montagu.

“Through my involvement, I’ve learnt a lot about soil biology and how microbes are helping to build a resilient plant,” Andrew says.

Andrew has used the information gained from his involvement in the project on Mulgowie Farming Company’s five properties.

For example, Kelvin has been supportive in helping the operation choose its cover crop based on crop rotation.

“It’s totally different down in Victoria as to which cover crops are going to work compared to north Queensland, so Kelvin’s advice has been very helpful,” Andrew says.

Additionally, Kelvin has been conducting strip till trials at Mulgowie Farming Company’s property in Maffra, Victoria, which produced positive results.

“Moving to zero tillage and minimum strip tillage from the result of trials – I didn’t expect to see the increase in yields as quickly as we did. There has been an improvement right from the first season,” Andrew says.

“Moving to zero tillage and minimum strip tillage from the result of trials – I didn’t expect to see the increase in yields as quickly as we did. There has been an improvement right from the first season,"

Andrew doesn’t just stay on the farm to learn about different growing practices as well as the latest in R&D. In September, he attended a grower study tour of South Australia, Victoria and Tasmania that gave participants the opportunity to visit case study farms and share experiences in getting the most out of precision ag technologies for their vegetable growing business.

This tour was part of Adoption of Precision Systems Technology in Vegetable Production (VG16009). It also involved seeing the iMapPESTS: Sentinel Surveillance for Agriculture, which Andrew found most interesting.

The iMapPESTS project is a collaboration of government, industry and science to develop a mobile cross-industry plant pest surveillance network, which will provide actionable information to primary producers and government on endemic, established, trade sensitive or exotic pests.

“I wondered if there were opportunities in the future for a mobile unit to be established up around Home Hill in Bowen. It was very good,” he says.

When on tour in these other regions Andrew also observed other strip till planters in action. He said that going on a tour such as this was very valuable, and he has been able to share the knowledge gained with his teams at Mulgowie Farming Company.

“I run our Operational Excellence Forum once a month, and that’s where we discuss innovation and new farming strategies. I’ve brought back what I’ve learnt from the soil wealth and precision ag tours and implemented it on our farms, which is making a big impact.”

In 2015, Andrew went further afield when he jetted off to California, Delaware and Arizona, for the USA Industry Leadership and Development Mission. On the mission, he gained an in-depth understanding of the processes, procedures and issues facing vegetable growers in the United States. Plus, the networking was invaluable.

“Getting to know the other participants, and have those open networking friendships with people is important – now we meet up at Hort Connections to discuss where horticulture is at in Australia.”

In 2018, Mulgowie Farming Company hosted a group of 40 delegates from Indonesia, Thailand, Taiwan, South Korea, the Philippines, Japan and Saudi Arabia. This was part of the AUSVEG-facilitated Reverse Trade Mission, which is delivered under the Vegetable Industry Export Program (VG16061).

The team discussed conventional and organic broccoli farming practices and provided the delegates with a tour of the farm and packing shed, with another positive outcome.

“We were able to show them the quality of our produce, the fresh quality aspect of Australian product and our standards. We then had a lunch where chef Alastair McLeod used our products in the culinary menu, and we got to network with the delegates,” Andrew says.

“From that, we did get some export connections – we’ve followed through with sales (exporting to some of the people who attended).”

Andrew recommends that other vegetable growers get involved in levy-funded R&D, as it is a great networking and learning tool.

“The bottom line is to be on the cutting edge of the potential that is out there for better quality crops” he says.

“I have received a broader understanding of farming innovation, helping me to develop sustainable farming practices strategies for Mulgowie to ensure we are producing quality fresh vegetables, while looking after our environment.”