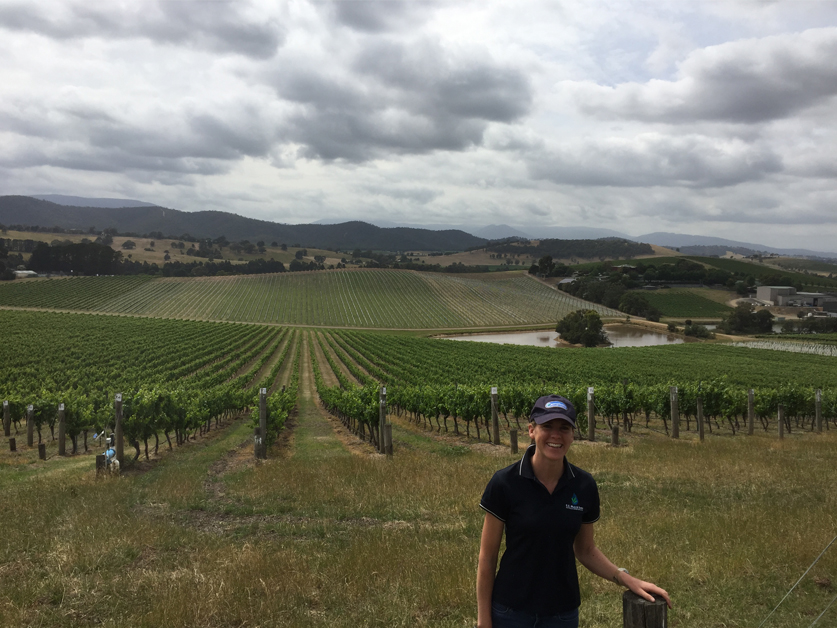 Perseverance pays off for Camilla

A proud advocate for Australian horticulture, Camilla Humphries has had a varied career in the industry to date. Camilla has enjoyed positions in horticultural research and winemaking and more recently, product development across a range of commodities, including vegetables, as part of her role at E.E. Muir & Sons. Vegetables Australia reports.

Helping on the family apple orchard from a young age piqued Camilla Humphries’ interest in horticulture, and set her on a career path that is now well-established.

As a child, Camilla attended potting days at the University of Melbourne, Burnley Campus – then known as Burnley Horticultural College – with her mother, and then incorporated horticulture into her science subjects at school, where she developed an interest in biology.

Camilla then went on to study Agricultural Science at the University of Melbourne, finishing with a master’s degree focused in biotechnology and plant nutrition. Subsequently, Camilla conducted a research thesis at the CSIRO Plant Industry in Canberra where she investigated the acquisition of phosphorus by wheat.

“Although the degree was focused on broadacre agronomy, crop nutrition can easily be transferred to the more intensive cropping of horticulture, to which I had a natural gravitation,” Camilla says.

Camilla took up her first post-university horticultural field research role in Orange, central-west New South Wales, before moving to Sydney where she worked on industry research projects for Hort Innovation. This was followed by a winemaking stint over in Sonoma, California.

Over three years ago, she joined Australian-owned horticultural supply and consulting business E.E. Muir & Sons. This followed a consulting role with a subsidiary of the business, which is owned by the Muir family. Camilla’s role is in Product Development, a recently-established branch within the business aimed at independently evaluating new horticultural products for its key suppliers and identifying a good agronomic fit to assist growers with their agricultural practices.

In addition to her Product Development position, Camilla is the Front Line Advisor for southern Victoria as part of the Apple and Pear Australia Limited Future Orchards Program. It is in this role where she returns to where it all started: in the orchard. Camilla conducts orchard fields days and runs research trials to improve orchard productivity. One of Camilla’s side projects is making her own apple cider and, as a committee member for her local Agricultural Show Society’s Cider Show in Red Hill, is an advocate for value adding products out of Australian grown and processed fruit.

Camilla’s desire to meet, engage and network with other young working professionals in the horticulture industry led her to successfully apply for a position in the Growing Leaders professional development program (VG15030), a strategic levy investment under the Hort Innovation Vegetable Fund. Camilla was part of the 2018 alumni, and her project team devised a strategy to encourage growers to adopt best practices for a more sustainable vegetable industry.

While the project’s bid for further funding was unsuccessful, Camilla gained valuable skills that have transferred into her role at E.E. Muir & Sons.

“I learnt how to think conceptually and strategise ideas. Through Growing Leaders, I was also given the chance to meet with other industry representatives and also gained a couple of industry friends who work with two major farming businesses in the south-eastern region (of Victoria) that are customers of E.E. Muir & Sons,” she says.

“I thank E.E. Muir & Sons for giving me the opportunity to take part in the Growing Leaders Program.”

“The horticulture industry is a dynamic industry to work for and although there are more men in the industry, it shouldn’t detract a bright young female graduate,”

Liaising with researchers, agronomists and growers, Camilla seeks out her horticulture knowledge from professionals who have been working in the industry for many years.

“I want to learn as much as I can from those nearing the end of their careers – before they go,” she says.

Camilla also appreciates the work that VegNET, Victoria and the South Gippsland Food Cluster undertake, and she is eager for further learning opportunities to present themselves within the horticulture industry; an industry that she is proud to be involved in.

“It’s not about public gratification for me; it is about my inquisitive nature, conscientious work ethic, adaptability and work satisfaction that drive me to achieve. I have had a few wonderful opportunities to share my career experiences at Melbourne University’s Agricultural Science Faculty dinners, and I’m also an advocate for the horticulture industry as a committee member for my local show society.”

Camilla’s passion for horticulture is evident by not just her varying roles since graduating from university, but her enthusiasm towards working with others within the sector.

“I enjoy hearing from a happy grower as well as getting out in the field and applying science practically, and meeting people along the way.”

She also has some words of advice for any young women who are looking to follow in her footsteps and enter the horticulture industry.

“The horticulture industry is a dynamic industry to work for and although there are more men in the industry, it shouldn’t detract a bright young female graduate,” Camilla says.

“There are many opportunities within the sector – we need to be savvy with adopting more efficient and sustainable ways of farming through research and innovation.

“You just have to be assertive, have faith in your own abilities and think outside the box; think of an idea which can differentiate you from the rest.”

Camilla’s apple cider is one of many Mornington Peninsula ciders to be featured at the annual Red Hill Show on Saturday 7 March. For further details, please visit redhillshow.com.au/cider-show.