Export Facilitators (VG16085) is a strategic levy investment under the Hort Innovation Vegetable Fund, and is designed to increase Australian vegetable exports by supporting growers to capitalise on commercial business opportunities. In this article, export facilitators share the stories of two growing operations that have benefited from the project and vegetable industry export resources.

Dr Johann Joubert is the CEO of Tassie Pride Glasshouse. In this case study, Johann explains the business and how the Export Facilitators project assisted it in export market preparations in 2019.

Out of adversity – following identification of a fruit fly outbreak nearby to Johann’s capsicum hothouses in 2018 – came opportunity as domestic supply chains were reviewed, and counter measures were strategised to reduce or remove market weaknesses.

Tassie Pride needed to ensure that it was able to supply markets that would accept its capsicums without compromising quality or speed to market. Once the fruit-fly suspension zone control area was lifted in early 2019, Johann engaged with Tasmanian Vegetable Export Facilitator Ian Locke to identify export opportunities and potential markets.

As a first step to better understanding the interaction with overseas buyers, a visit to Tassie Pride was arranged during the AUSVEG Reverse Trade Mission from Japan in February 2019. Due to quarantine restrictions, Tasmania is the only state in Australia permitted to supply capsicums, eggplants and cucumbers to Japan.

“Researching markets and your ability to supply them competitively is not an overnight project. You have to consider all options and adapt them to your business,” Johann says.

The next step in the export journey was to attend the 2019 Asia Fruit Logistica with AUSVEG and other vegetable levy-payers. Held every year in Hong Kong in September, AUSVEG provides emerging vegetable levy-paying exporters with the opportunity to build their international market knowledge and network with their Australian and international peers.

“This was a tremendous opportunity for Tassie Pride. The AUSVEG export team was fantastic and ensured that I had great touchpoints at every stage,” Johann says.

While the initial focus has been on Hong Kong and Singapore, the important high-level strategy has been to bolt exporting onto its existing Australian business. Its current focus is Australia but as production increases, new markets will have to be developed. Tassie Pride is building a new hothouse facility, and combined with modifications to their Lillico base, production will be from August to June.

“We will always support our key Australian customers because, in many ways, they are our partners – and have been for over a quarter of a century,” Johann says.

Throughout the export journey, Tassie Pride has sought support from the resources provided by the Export Facilitator project in Tasmania. No one company works in isolation, and assistance from AUSVEG, Hort Innovation and other exporters has been important and rewarding.

“Progress has been cautious. It has been great to have the support of Ian Locke, who provides the network and links to build our own capabilities and engage with the retailers in south-east Asia,” Johann says.

Since January 2020, Tassie Pride has had to put export development on hold due to COVID-19. Developing new export markets requires speedy, direct and capacity for small shipments by air in the early months of development.

“Singapore and Hong Kong were significantly impacted in February and March and following closure of the Australian border, airfreight came to a standstill; particularly for small volumes of highly perishable vegetables, such as our capsicums,” Johann says.

Other target markets such as Japan experienced a strong drop-off in demand for food service, and it will be sometime before relationships can be rebuilt with importers. FOODEX 2020 was cancelled and at the time of writing, there is still doubt as to whether Asia Fruit Logistica will be held this year in Singapore.

In Tasmania, the Export Facilitators project has continued to maintain contact with fresh vegetable producers through multi-digital communication channels and newsletters. As Tasmanian restrictions are eased, it will become easier to meet with growers and identify barriers to export post-COVID, as well as determine pathways to the new/next normal export markets. While some issues are still nebulous and unknown, we will continue to work towards the other side.

When tomato-potato psyllid was found in Western Australia in February 2017, Fox Farms had $250,000 of potatoes prepared for export. With the risk of reduced export opportunities for potatoes from WA, Fox Farms made the decision to diversify its business and start growing vegetables for export.

The Fox family has been farming in southern WA for three generations and has strong connections in Singapore, so it started exploring export opportunities for vegetables.

Patrick and Shannon Fox and their three daughters are from Scott River, 300 kilometres south of Perth. The abundant water, and mild climate, makes it a great place to grow potatoes and vegetables year-round. The main crops grown are Chinese cabbage (wombok), broccoli, celery and potatoes. Patrick and Shannon have another farm – including a packing facility – in Yarloop, where they grow potatoes and pumpkin. Fox Farms works with several other growers in different regions of WA who grow vegetable lines outside their production window, so that they can supply export customers year-round.

“Our export customers can sell large volumes in Singapore and offer us a consistent price for the whole year. While the price isn’t as high as the domestic price at times, it also doesn’t drop as low and allows us to budget and operate at an efficient scale.

“With export, we’re not planting and hoping we make money – we already have the price agreed before it’s in the ground. Unless there’s a crop failure, we know we will be profitable.”

In October 2018, Patrick and Shannon attended an export workshop in Perth that was arranged by vegetablesWA as part of the Export Facilitators project.

“Through the export workshop, we learnt quite a bit and got to meet other WA growers who are exporting,” Patrick says.

“Hearing from people like Jim Trandos and getting a better understanding of how air freight works was valuable. We also got to meet Michael Coote from the AUSVEG Export Development project, and since then we have been involved in the AUSVEG overseas trade activities.”

This includes the FOODEX trade show in Japan in March 2019.

“Attending the trade show was a real eye opener for us. There was quite a bit of preparation before we went but vegetablesWA and AUSVEG were helpful,” Patrick says.

“From helping us polish up our company brochure, through to organising introductions to Japanese importers before we travelled to Japan and arranging the market insights tour – it was a very worthwhile experience.” 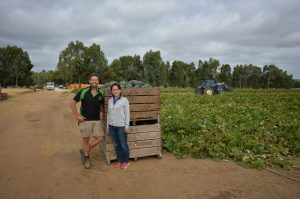 Patrick Fox with Kiyoko Ozawa, who was part of the AUSVEG Export Development team in 2019.

At FOODEX, Patrick met importers who were particularly interested in the Kabocha pumpkin that he had just started growing.

“We sent some samples of the Kabocha to a couple of importers and they were impressed with the quality. Our supply window fits in nicely between the local Japanese supply and other countries, such as Mexico and New Zealand. It’s exciting to be breaking into a new market with so much potential,” he says.

Export already makes up 90 per cent of the Fox Farms business but the volume of exports has grown significantly in the past 12 months. During the 2018/19 financial year, exports have increased by about 300 per cent with 400 shipping containers of produce exported by the business. Each container is 40-feet high.

Patrick and Shannon are happy with their business direction.

“Our plan is to build on what we have and scale up production of the lines that we are already growing. We’re keen to look at some new markets – potentially the Middle East – and start dealing directly with retailers in new markets,” Patrick says.

For more information about the Export Facilitators project or to get involved in export development activities in WA, please contact Manus Stockdale at manus.stockdale@vegetableswa.com.au or on 08 9486 7515. Tasmanian growers who would like further details, please contact Ian Locke at ian.locke@tasfruitveggroup.com.au or on 0438 911 319.

This project is funded by Hort Innovation using the vegetable research and development levy and contributions from the Australian Government.