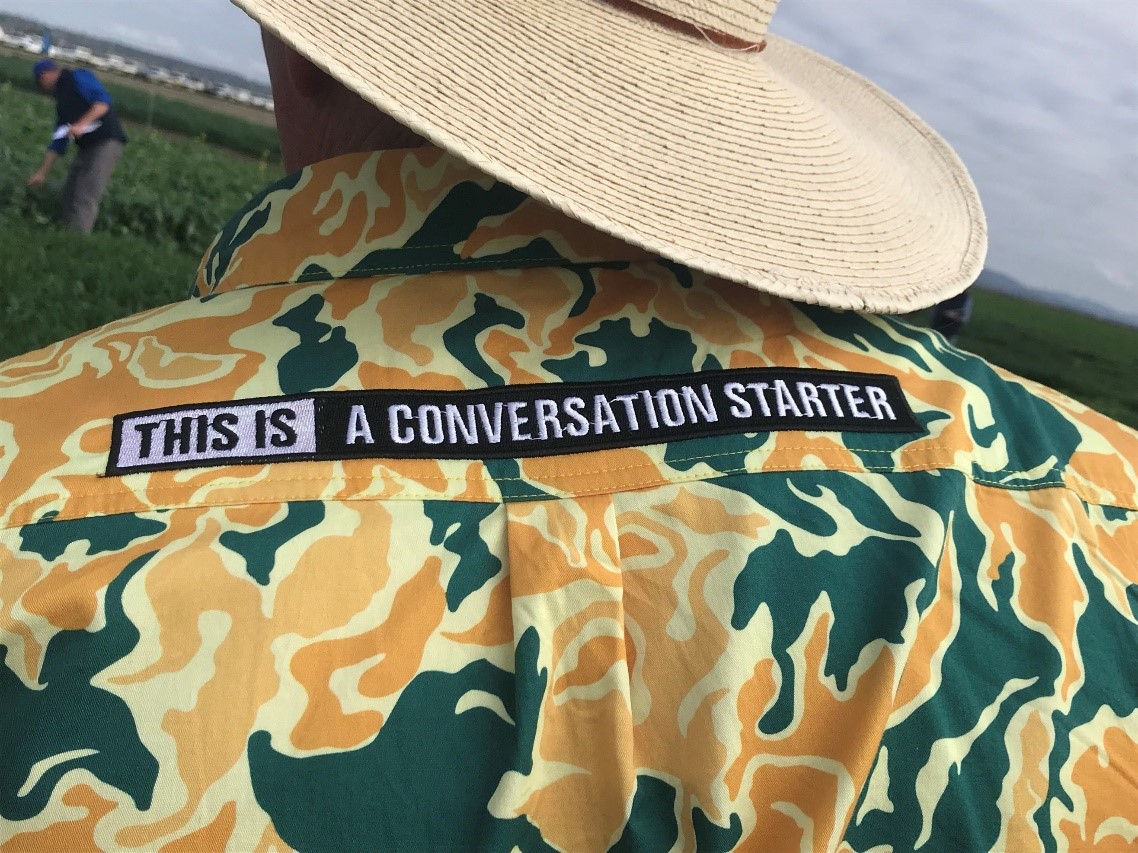 They say it’s better to give than receive, and this Christmas, Corteva Agriscience is doing just that through a new partnership with social enterprise TradeMutt.

Acknowledging a tough 12 months for the Australian agricultural community, Corteva staff will distribute 500 of TradeMutt’s distinctive, colourful shirts to suppliers, staff and customers in December, in support of kick-starting conversations about mental health in the ag sector.

TradeMutt is Australia’s only social enterprise workwear company. The brainchild of Edward Ross and Daniel Allen, two young tradies from Queensland, it aims to tackle suicide head-on – in particular among men.

As co-founder Ed Ross explained, TradeMutt is about Aussie workers looking great, feeling great, and being part of a movement that will change the face of men’s mental health forever.

“Dan and I met on a building site in 2014 and soon became best mates. We were always chatting about business ideas while on the tools, and one thing we noticed was a massive lack in the variety of workwear,” Ed said.

“At the same time that we were pursuing that idea, Dan lost a mate to suicide, which was right out of the blue and completely unforeseen. We were both disillusioned with the mental health space. Nothing seemed to be getting people talking and nothing resonated. And what did exist, didn’t work.

“So we tied our workwear idea into changing the face of mental health in Australia by trying to get men and women talking, but especially blokes because they are the most at risk. And with that, TradeMutt was born.”

TradeMutt shirts are distinctive and loud. There is no other workwear like it, so it’s perfect for kick-starting discussions about a sometimes tricky topic. ‘This is a Conversation Starter’ is printed on the back of every shirt. And five per cent of all shirt sale profits go to the ‘This is a Conversation Starter Foundation’ to help empower people with the tools and understanding to practice mental wellness and in turn reduce the rate of suicide.

The workwear personifies Ed and Daniel’s thinking around the mental health space, to take a bit more of a light-hearted approach and help create a social shift around the issue.

There is no doubt that mental health is an issue in Australia, especially among men, and more specifically, men in rural and remote areas. According to Beyond Blue, male farmers in Australia  die by suicide at significantly higher rates than the general population and non-farming rural males.[i]

Until now, TradeMutt’s workwear has mostly been taken up in the building, construction and mining industries, with demand for the product and its mental health message continually growing. This partnership with Corteva will be the first to reach out directly to rural ag communities.

Corteva and TradeMutt have developed a customised shirt, using Corteva colours of blue, orange and green. Like all TradeMutt shirts, the ‘Corteva’ is 100 per cent cotton, hardwearing and includes the ‘This is a conversation starter’ message.

For Kate Daly, Corteva’s Territory Account Manager in North Queensland, the decision to partner with TradeMutt was simple.

“Mental health is a big issue in ag. It has been a difficult year for so many people with droughts, floods, fires. Not just farmers, but resellers and distributors, everyone has been impacted,” Katy said.

“As an Account Manager, we’re on the road and in fields nearly every day.Often we’re visiting farms where people haven’t spoken to anyone other than family in a week. There’s a personal connection that goes beyond talking about the practicalities of growing or planting.

“Last Christmas, we handed out a few general TradeMutt shirts, and the response was positive. The shirts really helped to spark conversation to check in about how people were. And that’s why this year Corteva has made a customised TradeMutt shirt to distribute more widely across the country.

“It’s a small thing, and it’s not a fix for the issue, but it is a way of opening people up, listening, and in some cases having a bit of laugh. It could also be a step for those that need help to seek help.”

“We know that isolation is a big challenge in our Australian ag community,” Mr Kaan said.

“Ed and Dan from TradeMutt have found a way to talk to people, especially men, about mental health and encourage the cultural shift in Aussie blokes that is necessary to lower the rate of suicide.

“Their message that it is not only acceptable to talk about mental health, but that it is also safe and encouraged, is such an important one. Corteva is proud to be involved in this small way.”

If you or anyone you know needs help: