Pest and disease management is an ongoing challenge for our industry and access to accurate and timely information is essential for decision makers on-farm. iMapPESTS aims to provide a framework for a coordinated cross-industry system that can rapidly monitor and report the presence of high-priority airborne pests and diseases. Shakira Johnson reports.

iMapPESTS: Sentinel Surveillance for Agriculture (iMapPESTS) is a national program of research, development and extension designed to put actionable information relating to pest and disease dynamics into the hands of Australia’s primary producers, industries, and governments. The timely delivery of this information will support enhanced on-farm pest management, biosecurity response efforts and proof-of-freedom claims.

Over a five-year period (2017-2022), the iMapPESTS program is investigating advanced pest and disease surveillance, diagnostics technologies, including custom-designed and built mobile surveillance units (termed ‘Sentinels’) that incorporate specialised trapping equipment and technology. Sentinels are deployed in trials at various locations around the country and capture airborne samples that are examined to identify high priority pests and pathogens.

The data and information generated by the surveillance trials are shared with industry through various communication channels and extension activities, an activity being led by AUSVEG, in collaboration with the extended research and industry network.

While the Sentinels trap airborne pests and pathogens, researchers are trialling new and emerging diagnostic tools that aim to speed up the delivery of accurate information on what exactly is captured. In addition to speeding up accurate reporting of target pests, the iMapPESTS diagnostics collaboration is using high throughput sequencing (HTS) to investigate ways to report on a wider range of insects captured by the Sentinels, including pests and beneficials. These techniques have the potential to monitor for pests and vector-borne diseases of biosecurity interest to the industry.

Another element of the diagnostics research involves analysis of the gut contents of high priority pests to better understand their feeding habits, such as the plants they may take refuge in once a crop is harvested, or their preference for one crop over another.

AUSVEG is currently working with SARDI, AgVic and Data Effects to create a dashboard for users to access the outcomes of the Sentinel surveillance and will seek feedback from industry to shape it into a valuable tool to improve pest and disease management.

The iMapPESTS collaboration deployed the second mobile surveillance unit to a crop of Brussels sprouts at Langhorne Creek, in collaboration with AE Cranwell and Sons. The Langhorne Creek trial commenced in mid-July and monitored airborne pests and pathogens until early September. The region is most well-known for its vineyards; however, there are a variety of crops grown in the area including potatoes, carrots, Lucerne and chickpeas, to name a few.

Sentinel 2, like the prototype Sentinel, features several suction traps on board, including two high volume air samplers to trap airborne spores, a two-metre insect trap and a six-metre insect trap, with a network of smart lure trap devices stationed close by. During the trial, airborne samplers and lure traps targeted high priority targets such as:

Identifying what’s in the air around the crop

Molecular testing can deal with large numbers of samples rapidly and accurately. Yet, molecular tests for

many of the pests and pathogens do not yet exist. iMapPESTS includes the development of more diagnostic tests using next-generation sequencing by AgVic, Sugar Research Australia and University of Queensland.

The early trials have highlighted the importance of a combination of traditional methods of identification (morphological identification) and modern techniques as the research investigates the capacity for molecular ID and quantification of in-field samples. It is important that we use both traditional and modern methods. Molecular tests will only identify species for which they have been developed. Morphological identification can identify any pest but is very time consuming, particularly in mixed population samples like those collected by the Sentinel.

The pests collected by the two-metre and six-metre suction traps on the Sentinel can also be compared to gain insight into what might be hanging around in the paddock at two metres, versus what is captured on a regional scale at six metres into the air column. This tall trap generally captures smaller insects caught up in higher wind currents and larger migratory insect. The lower numbers in the two-metre trap indicated good pest control.

Visualising patterns of individual pest and pathogen occurrences, together with weather data, will help researchers and decision makers build an understanding of pest and population dynamics.

The pest and pathogen data is married to corresponding environmental data from the time of trapping and shared via the iMapPESTS website. 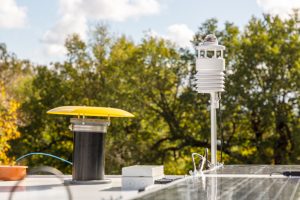 The current suite of three Sentinels are being deployed in growing regions around Adelaide, including Adelaide Hills, McLaren Vale, Virginia and the Riverlands.

The suite of Sentinels is set to expand over the remainder of the year, with Sentinels 4 and 5 launching this spring, and a final unit to be unveiled in early December. They will range in size, deployment method (trailer, skid, modular unit) and composition of traps and other features. These features are being explored to cater to different environments and industry requirements and will be deployed at strategic locations around the country in 2021 for trialling.

The iMapPESTS team will work with growers and industry representatives to understand the best way to communicate and visualise the dynamic pest and pathogen information for end-users. Growers and those involved in plant pest management are encouraged to visit the iMapPESTS website for more information or to get in touch.

This project is supported by Hort Innovation through funding from the Australian Department of Agriculture, Water and Environment as part of its Rural R&D for Profit Program and funding from 16 partner organisations.