Now, perhaps more than ever, people are concerned about their health. Higher vegetable intake is advised, but what happens if veggies make consumers sick? A project has been investigating pre-harvest water and untreated animal manure withholding periods to minimise or eliminate the risk of microbial contamination of high-risk vegetable crops. Project team member Dr Jenny Ekman from Applied Horticultural Research reports.

One of the best ways to stay healthy is to eat plenty of vegetables – a message the industry has been strongly communicating. Vegetables are ‘hero’ foods: here to save us.

However, heroes can soon become villains if things go wrong. Bacteria that cause human illness, such as E. coli and Salmonella, can be present in soil, carried in irrigation water and – very, very occasionally – found on vegetables. Even small numbers of these bacteria on products that are eaten raw, such as leafy salad greens, can make people sick.

Washing vegetables with sanitisers can reduce risk. However, even a triple wash with chlorine cannot remove 100 per cent of bacteria once they are on (and in) fresh vegetables.

The best way to reduce the risk of microbial contamination is to keep animals and manure away from irrigation water and cropping areas. Risk can also be reduced by only applying soil amendments that have been properly composted and using irrigation methods (e.g. sub-surface drip) that avoid contact with the harvestable part.

Food safety risks from contaminated water depend on the irrigation method used. However, this is not always possible. Poor or untested water may be the only water available, with overhead systems the only practical way to irrigate many crops. Moreover, manures have many benefits for soil; they can sustainably add organic matter and nutrients, improve structure, and stimulate microbial activity.

Bacteria that evolved to live inside the human gut are relatively poorly adapted to the exposed, dry conditions on plant surfaces. Withholding periods allow populations of human pathogenic bacteria in soil and water to die off, returning to normal environmental levels.

For example, Freshcare stipulates a withholding period of 48 hours between application of water that may contain >100 E. coli bacteria (CFU)/ml and harvest. Untreated manures must be incorporated at least 90 days before harvest if products are grown in or close to the soil and may be eaten raw (e.g. carrots, leafy greens) with a 45-day exclusion period for lower risk products (e.g. potatoes). It should be noted that other standards mandate much longer exclusion periods of up to 365 days, or simply prohibit the use of manures.

A recently-completed project examined whether these withholding times are appropriate for Australian vegetable crops. Pathogen persistence from paddock to plate (VG16042) is a strategic levy investment under the Hort Innovation Vegetable Fund.

Cattle manure and poultry litter were incorporated into plots containing clay loam or sandy soil at a high rate (20t/ha) at the start of spring (A), summer (B) and autumn (C) crops of cos lettuce.

As the manures did not contain detectable human pathogens, E. coli was added to achieve approximately 100,000 individual bacteria (CFU) per gram of manure. Salmonella spp. was also added to the poultry litter, achieving approximately 2,500 CFU/g manure.

Additional plots were amended with manure alone (no added pathogens) or left as untreated controls (no manure). Soil samples were taken for testing at intervals during crop production, and mature lettuce were tested from crops B and C.

Where did all the bacteria go?

Populations of E. coli in soil and poultry litter fell from up to 20,000 CFU/g soil to below the level of detection (10 CFU/g) within 50 days in all three trials. This indicates a mortality of over 99.9 per cent. A similar result occurred for soil and cattle manure in trials A and B, with E. coli declining below the level of detection within only three weeks. However, the bacteria survived longer in the relatively mild conditions of trial C (autumn). Despite this, after 50 days, the average population was <13 CFU/g soil, suggesting at least 98 per cent had died.

Salmonella populations also declined rapidly after addition to soil. In trials B and C, the bacteria could not be detected in samples taken two weeks or more after the poultry litter was incorporated. However, Salmonella survived significantly longer during trial A (spring). Even though the population was low (<3 bacteria/gram), there was still a 50-50 chance of detecting Salmonella spp. in soil after 50 days.

To simulate a worst-case scenario, mature lettuce was tested for human pathogens with the dirty outer leaves still attached. Of 200 lettuces tested, two (one each from poultry litter and cattle manure) had unacceptable levels (>100 CFU/g) of E. coli. However, by far the highest level of E. coli recorded, at 40,000 CFU/g, was on a lettuce from an unamended control plot. None of the lettuces tested were positive for Salmonella. 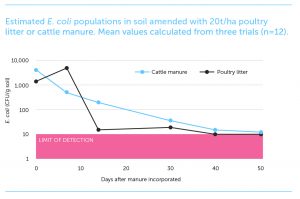 These trials examined how long E. coli and Salmonella bacteria survive on the surfaces of leafy vegetables. Plants were irrigated with water containing moderately high populations of these bacteria. Both species fell below or close to detectable levels within 48 hours. Results were similar for a range of vegetables (cos lettuce, parsley, silverbeet, kale, spinach), regardless of whether they were grown in a glasshouse or the open field.

However, die off rates were very different if the plants were damaged. In this case, bacteria survived for at least 6 days after irrigation.

Even minor injury – such as cracked leaves, light frost damage or infection by disease – can increase the risk of bacteria surviving on vegetables. We found similar results even when there was heavy rain, or temperatures over 40oC. Cos lettuce appeared particularly susceptible, possibly because they are so easily damaged.

The next question was – if damage has occurred, how long does it take the plant to heal, regaining its usual resistance to contamination? In our trials, baby spinach damaged 24 hours or more before irrigation was no more likely to be contaminated than undamaged plants. However, cos lettuce, plants damaged up to four days before irrigation with contaminated water still had high populations of E. coli after the 48-hour withholding period. 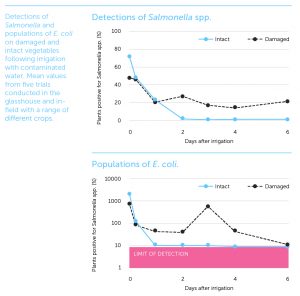 The quality of water that contacts the plant is the most important factor affecting the food safety of leafy vegetables. Many of the significant food safety outbreaks associated with salad greens can be traced back to contaminated water. In contrast, contamination by human pathogenic bacteria surviving in the soil is less likely, especially if manures are incorporated at least 50 days before harvest.

The required 48-hour withholding period between application of water in irrigation or crop sprays significantly reduces survival of human pathogens on leaf surfaces. However, these bacteria will persist much longer if crops are damaged. This injury can be relatively minor, certainly below commercial thresholds.

Once internalised, human pathogens cannot be easily removed. Even washing with sanitisers cannot ensure vegetables are safe to eat if they have been contaminated before harvest.

If vegetables have been damaged, avoiding contact with poor quality water (>100 CFU/ml E. coli) for >24 hours, and increasing the withholding period between application and harvest, may reduce risk. However, in our trials, cos lettuce was very susceptible to contamination. It is recommended to avoid contact between cos lettuces and contaminated water at all times.

Guidelines on reducing risk from manure and safe use of irrigation water, as well as fact sheets on this project, are available from the Fresh Produce Food Safety Centre website, Hort Innovation, Applied Horticultural Research and Freshcare.