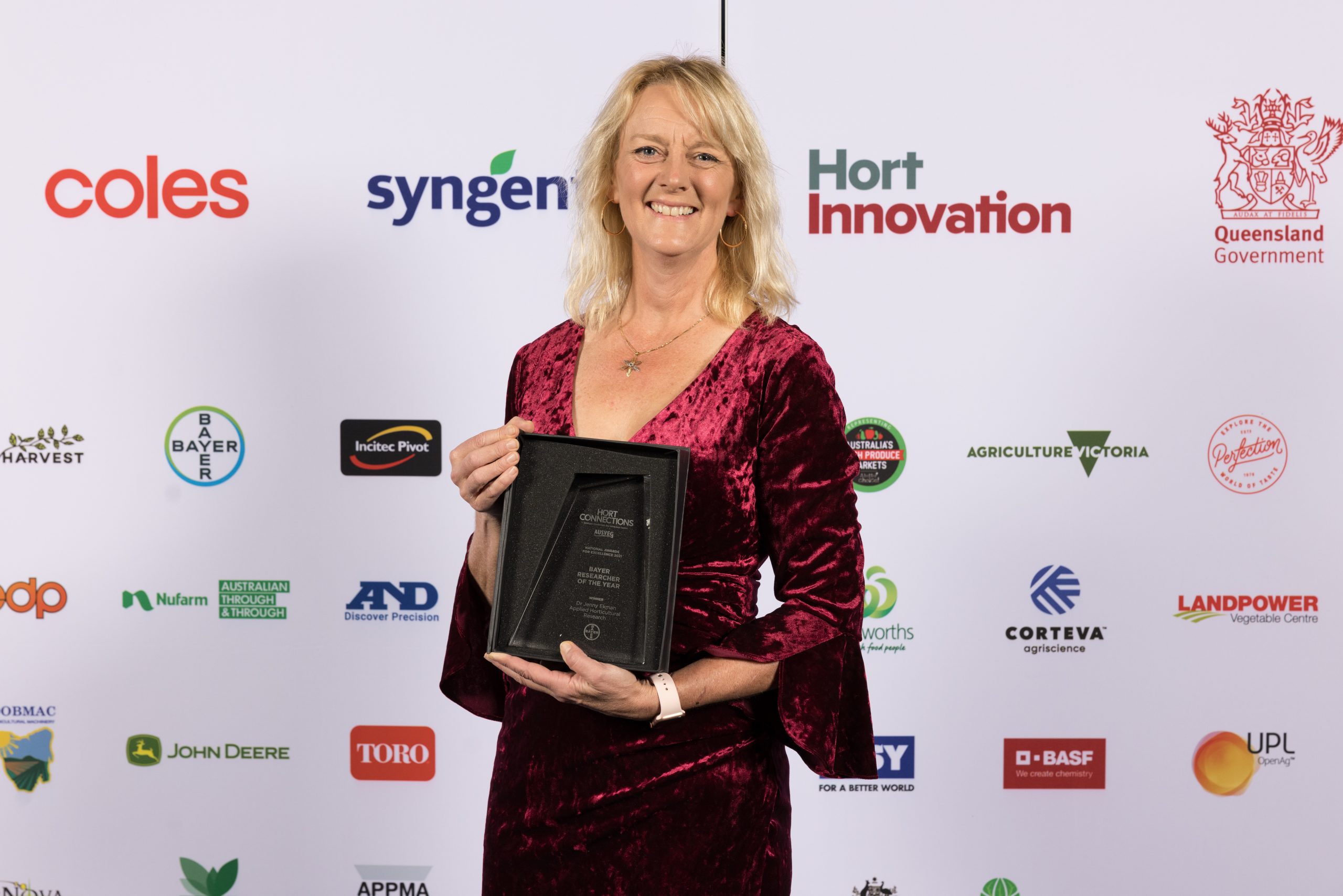 Celebrating a successful career in horticultural research and extension

Dr Jenny Ekman has over two decades of experience in vegetable industry research. Currently working at Sydney-based Applied Horticultural Research, Jenny ultilises her strong writing and communication skills to effectively translate scientific language into information that is readily understood and used by growers. Michelle De’Lisle speaks to Jenny about her work, which was recognised in 2021 when she received the Bayer Researcher of the Year.

Dr Jenny Ekman was involved in the printing industry when she decided to give working with computers a miss, and instead concentrate on her love for horticulture.

Jenny studied a Bachelor of Horticultural Science (with Honours) at Western Sydney University and completed a PhD through CSIRO at North Ryde, investigating the link between respiration rate and storage life of fresh produce. Jenny’s PhD studies took her to France, where she spent several months. She subsequently completed a post-doctorate at the University of California in Davis, which is renowned for its postharvest research.

Jenny returned to Australia and joined the New South Wales Department of Primary Industries’ Market Access Group, which was based on the Central Coast. She spent 11 years there before crossing to Applied Horticultural Research (AHR) in early 2013.

Jenny’s job title is Research Scientist and it’s a varied role, which can present challenges.

“When you think of most researchers, they specialise in something such as fruit fly management or Phytophthora or a particular disorder,” Jenny says.

“Whereas we at AHR work across so many different crops and parts of the value chain as well as looking at different organisms. We have to be flexible and responsive, focusing on whatever the problems are in industry.”

Jenny’s role focuses on not just research, but a plethora of extension and communication activities.

“What we do is constantly interesting and challenging. I’m spending some of my time as a researcher and quite a lot of the rest of the time as a science communicator more than anything. I wear a wide selection of hats.”

Over the years, Jenny has worked in the postharvest space along with pathogen management and agronomy; however, more recently her focus has been on potatoes.

In 2021, Jenny was recognised for over 20 years of tireless research and extension when she took home the Bayer Researcher of the Year award at the National Awards for Excellence.

It was a proud moment, one that Jenny says was “very gratifying.”

“I’ve worked hard on vegetable research and extension activities. At DPI, I worked a lot with veggies and again with AHR – I’ve invested in it and it’s an industry that I really believe in; the importance of it and the importance of what we do.

“Receiving the Bayer Researcher of The Year award was a combination of all of that, and to be recognised by one’s peers in that way – as having contributed something to the industry – is incredibly satisfying and rewarding.

“It’s like receiving an Olympic medal for research. You feel you’ve succeeded in achieving something and then giving something back that is worthwhile for the industry.”

“Horticulture used to be a physical thing – you had to be strong and able to lift every box. But the industry’s not like that anymore, so that’s made it more accessible to women."

Following years of undertaking various forms of research, there are a couple of projects that stick in Jenny’s mind as being interesting and beneficial to the vegetable industry.

One was Identifying and sharing postharvest best practice on-farm and online (VG13083).

“That project was a great experience because it involved basic research on post-harvest storage, which people think has been done and we know all this stuff – but we don’t,” Jenny explains.

“It was nice to revisit some of this work that had been done back in the fifties, which is what we’d been basing recommendations on. We did a bit of ground-truth on those and found that many of them were not right anymore, probably because of new varieties and new storage technology and so on.

“However, the best part was running workshops around the country where we met lots of vegetable growers and talked to them about postharvest. We found that people found it interesting even when they didn’t expect it to be. Getting that engagement between growers and science, and seeing their faces light up at some new thing that we were able to share with them, was most satisfying.

“We wrote a little book (Postharvest management of vegetables: Australian supply chain handbook), which I still feel was a total brain dump of all my experience and everything I’ve learned over the years. I felt quite proud of that little book that we made (and still am). That was a great project for the vegetable industry.”

For pure interest, Jenny says Review of issues and options for preventing and removing redback spiders in broccoli (VG17014) was a standout.

With an increase in redback spider numbers being reported in broccoli, VG17014 reviewed all available information on the problem. It examined factors that may be contributing to the spiders entering broccoli crops, or contaminating broccoli after harvest, and produced key findings to help explain the situation.

“I felt like a detective, trying to figure out how these spiders are getting in the broccoli. Where were they coming from? Why was this happening? It was very interesting,” Jenny reflects.

Jenny believes further research needs to be undertaken in waste and sustainability, particularly replacing plastic packaging – which she says has got to be a top priority for the industry, because there’s so much public feeling about wanting to reduce use of plastics.

“From a postharvest point of view, plastic is fantastic. But getting rid of it is hard. I think finding commercially viable alternatives to plastics is one key thing. And the second thing is reducing waste in the supply chain and value chain in terms of better the postharvest management, making sure that products get to the consumers with plenty of storage life, so that they’re able and encouraged to eat them,” Jenny explains.

“There are so many complaints about the quality of produce in general. So, if we can manage to get products to consumers in top condition, that will encourage them to eat more and the waste less.”

Meanwhile, Jenny is enjoying the extension and communication components of the potato project, and she sees herself moving further into the science/communication space.

“Growers pay for this research and unless they can understand and use it, then what’s the point? There is no point,” she says.

“This is an area which isn’t given enough importance. It’s so easy to fund the project and then you produce a report and a webinar – but that’s not really extending the results or explaining it and making sure that people can use the findings.”

Opportunities for women in hort

Jenny lectures at Sydney University, and she says lot of the top students in the horticulture course are women.

“Horticulture used to be a physical thing – you had to be strong and able to lift every box. But the industry’s not like that anymore, so that’s made it more accessible to women,” Jenny says.

“We’re very pleased to have Stephanie as a bright and enthusiastic young woman working in research. She’s got horticulture industry knowledge as well as a good science background – bringing those two together is going to be fantastic,” Jenny says.

“There are lots of opportunities for women in horticulture. I see many young women with organisations like wholesalers and with growers that are coming through now – it’s a great time to be in this sector.

“I think that in the future, we’re going to see a many more women in involved in the industry and doing a great job.”