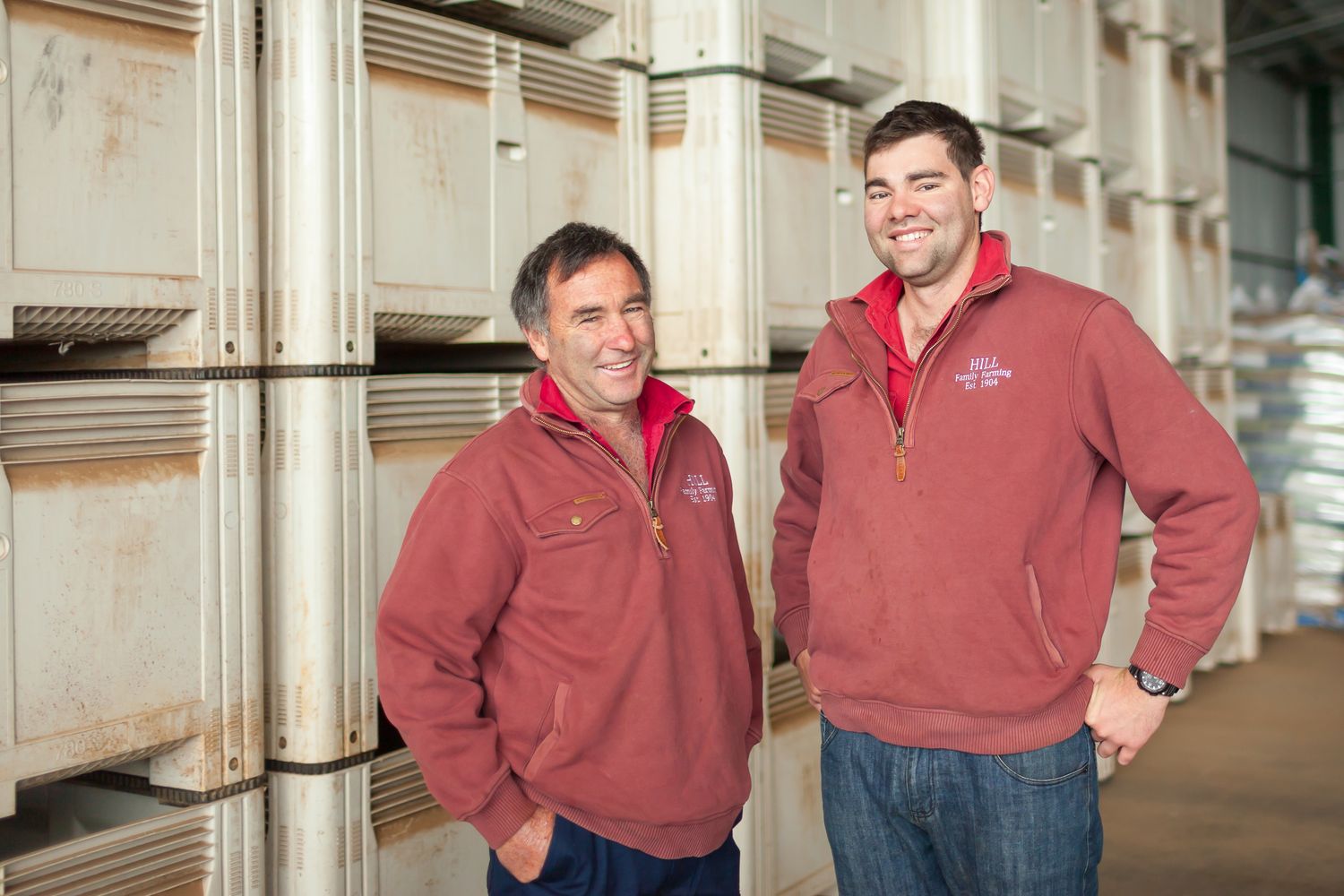 Hill Family Farming: Introducing the next generation of potato growers

Established in the early 1900s, Hill Family Farm has a rich history of growing potatoes and is one of only a few potato growing operations remaining in the Southern Highlands of New South Wales.

It’s not just in the name – potato growing is truly a family affair for the New South Wales-based Hill family.

Located in the rolling hills of the Southern Highlands, third-generation grower Jon Hill operates Hill Family Farming with his wife Carol, his two brothers Todd and Warwick, and their wives Angela and Nicky. The fourth generation is also coming through on the family-owned farms, with Jon’s son Ryan now working alongside his father and uncles while Jon’s parents, Jack and Barbara, are also still actively involved in the business.

Jon was raised on his father’s potato farm, which was established in 1904 by his great-grandmother. It was originally a dairy operation with potatoes and other vegetables grown on the property.

Jon’s raw passion for potatoes is evident – as he says, he enjoys “growing, digging and packing a good crop of spuds”.

“And then to be able to sell them is the icing on the cake,” he says.

The Australian spud market has changed significantly since Jon began growing potatoes with his father, and the landscape will look different again for Ryan as he progresses through the business.

“When I first started growing potatoes, we were growing washed cocktail potatoes for the Sydney markets five nights a week,” Jon recalls.

“This market disappeared once South Australian growers could grow their product first-grade out of the sandy soil. And with refrigerated transport, they could get to Sydney overnight.”

Today, the Hill family produces fresh market and brushed potatoes as well as crisping potatoes for Snack Brands Australia. Ryan predominantly grows Dutch Cream potatoes and is in charge of the quality assurance side of the business. He is learning as much as he can about the potato industry so he can follow in Jon’s footsteps.

Returning to the farm was always at the front of Ryan’s mind.

“My interest in the potato industry goes back to when I was a kid riding around in the tractor with my dad, helping him with the irrigation and going in the truck to the markets. Today I get to do it all myself,” Ryan says.

“I pursued other jobs once I left school but was always interested in what everyone was doing at home on the farm; looking at the weather and thinking what job they would be doing at that particular time.

“My mind was certainly not on the job at the time – I always wanted to get back onto the farm.”

Ryan made the decision to return to the farm after taking into consideration a number of the challenges he would face.

“After discussing with my father what was involved in working on the farm for long hours as well as relying on the weather and lots of competition, I made a choice,” he says.

“If I wasn’t able to succeed with the help of my family, I probably would not be able to do it at all.”

“My interest in the potato industry goes back to when I was a kid riding around in the tractor with my dad, helping him with the irrigation and going in the truck to the markets. Today I get to do it all myself."

For the Hill family, many of the challenges they face can be attributed to the extremities of the local climate. For instance, potatoes are grown in paddocks that are more sheltered from the westerly winds in order to protect the crops.

“We have been hit by frosts, and we’ve had well-below average rainfall with no run-off to fill our dams,” Jon says.

There are also the added complexities of growing potatoes in the Southern Highlands, which is experiencing a growth in population. The 2016 Census revealed a population increase of 7.8 per cent in the region.

“We are blessed to be in the Robertson area so close to Sydney – only two hours to the markets and chip factories. Our potatoes like the warm summer days but cool nights of the Southern Highlands,” Jon says.

“But because of the close proximity to Sydney, a lot of the farms are purchased by Sydney retirees/businesspeople which makes it impossible for our business to compete on price.”

Ryan also identified this as an issue he will face into the future.

“I can see it’s only going to get harder in this area to grow potatoes because of the land being so expensive. Because of this reason, we will have to rent from other property owners and there is not a lot of people here who like to rent.”

Disease is also an ongoing issue that needs to be managed – Jon credits using healthy, clean seed as well as rotation as important factors in disease resistance as well as sustainability.

“Know your seed grower and use long crop rotations. By growing brassica and rye corn into the paddocks, this biofumigates the soil,” he says.

“Our agronomist keeps us up-to-date with the latest pesticides and disease maintenance products. We also sap test our crops to see how healthy our plants are. Also, by speaking to other growers in the industry we learn and pick up lots of new ideas.”

There is always an abundance of information for Ryan, who receives his on-farm information and advice from Jon, his uncles, grandfather and other local growers.

Jon’s proudest achievement is being able to work with his family and purchasing land of their own. The future is bright; however, he is taking it one year at a time to remain sustainable. It is a view shared by his son, who is looking to implement digging technology as well as improving practices in the packing shed.

“As we keep moving forward day after day, year after year, we seem to get more efficient and learn from our mistakes,” Ryan says.

“In 10 years’ time, if we are still going strong in the potato industry, I would not only be proud of myself but I would be proud of my family.”

Jon’s advice for those wanting to enter or remain in the industry is simple: make sure you are happy with what you are doing.

“Enjoy your job – it makes it so much easier to get up each morning if you enjoy your job,” he says.

“It gets hard sometimes, but the rewards are worth it in the end,” Ryan adds.

This grower profile first appeared in the leading magazine for the Australian potato industry, Potatoes Australia, and was featured in the AUSVEG Weekly Update published 5 February 2019. If you’d like to subscribe to receive a new edition of Potatoes Australia in your mailbox every two months, use our online subscription form!