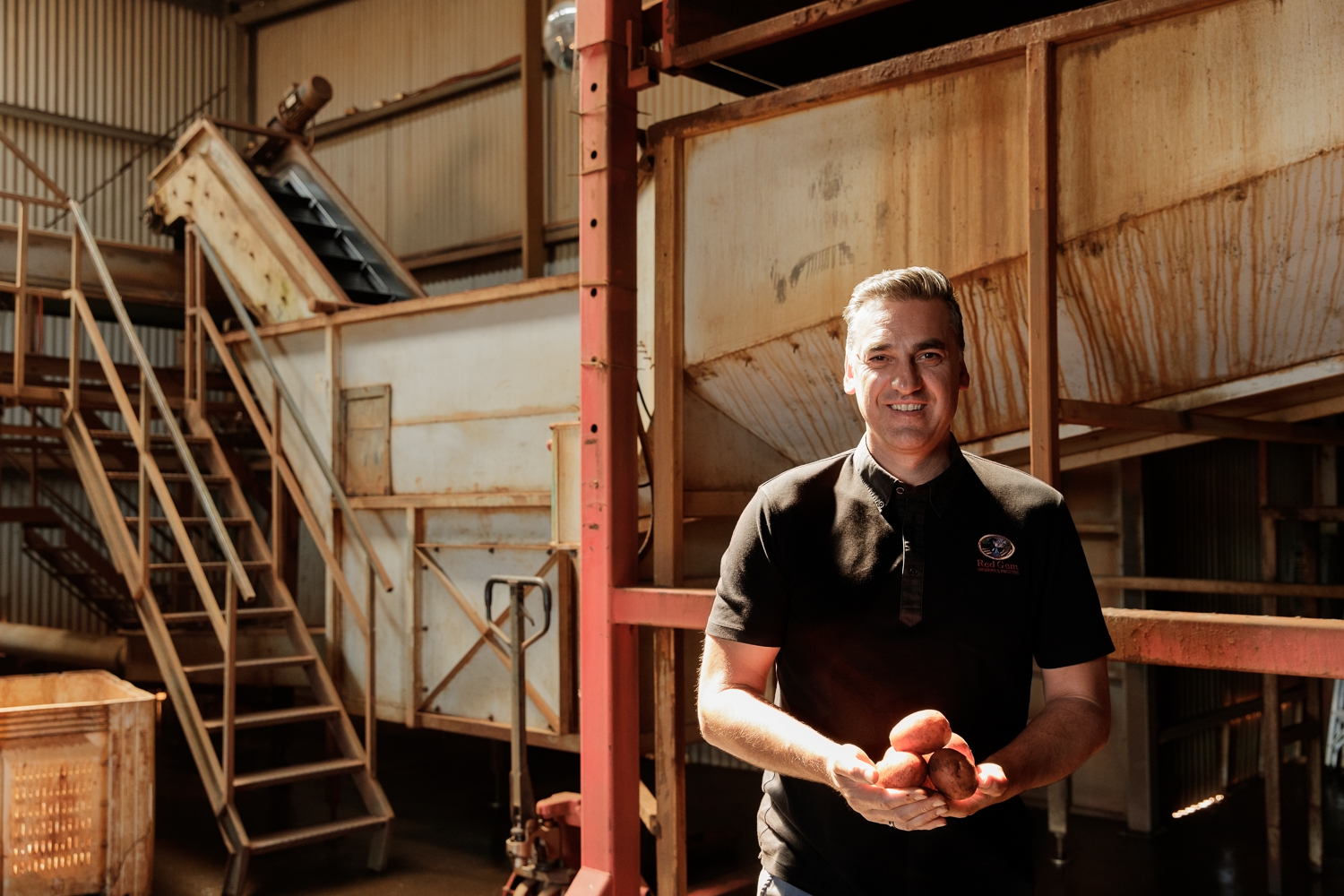 Father and son duo Guido and Robert Cerchiaro are aiming to significantly increase their business’ efficiencies by becoming the first potato growers in Australia to trial x-ray technology in their packing facility, courtesy of the Coles Nurture Fund. Robert, the General Manager of Red Gem Growers and Packers, spoke to AUSVEG about this latest innovation and the potential long-term benefits for the Australian potato industry.

The Victorian township of Gembrook has a rich potato growing history – located just 50 kilometres south-east of Melbourne, potatoes have been grown in the red volcanic soil surrounded by the rolling hills of the picturesque Dandenong Ranges since the late 1800s.

However, due to market access limitations that have developed since the early 1990s, many potato growers have moved to the Gippsland region, including Mirboo North and Thorpdale.

Among the potato growers who relocated from Gembrook is Guido Cerchiaro and his son Robert from Red Gem Growers and Packers. The pair now operate their business from Nar Nar Goon, known as ‘the Gateway to Gippsland’.

Red Gem grows and supplies brushed and washed varieties of potatoes to major retailers around Australia. The business is based in Nar Nar Goon but it also has farms operating in Hillston in the Riverina region of New South Wales and Mount Gambier in South Australia. Trials of sweetpotato and onions are also underway through joint venture crops in Gippsland.

However, it is in the packing shed where the business’ latest and most exciting innovation is currently taking place. A 32-year strong partnership between Red Gem and supermarket chain Coles has culminated in an investment that may change the shape of the Australian potato industry.

In 2018, Robert and Guido received a $350,000 Coles Nurture Fund interest-free loan to implement x-ray vision technology into their potato packing facility, which is expected to deliver improvements in the quality of Crème Royale potatoes supplied to Coles. It will also be environmentally-friendly, with the equipment powered entirely by solar panels. The trial is the first of its kind in Australia and started in January 2019.

Robert Cerchiaro’s search for technology to improve potato growing standards and enhance potato quality for consumers led him overseas to the United States and Europe. In the US, Robert found this x-ray vision system, which is used by most food manufacturers for metal detection.

“It takes an image of the potato based on density, so it sizes fantastically, but it also sees through the potato, looking for holes, voids and density changes. As soon as I saw the x-ray vision system, I thought that this is what we need for our brushed potatoes – the help we’re looking for is this system,” he says.

While there have been some teething problems, implementing this ground-breaking technology into the packing shed has already made an impact on the business.

“A lot of the workload was on graders and workers who were inspecting the potatoes. They were taking out undersized and oversized potatoes because of mechanical error; they were doing a lot of that work and were still having to grade for quality,” Robert says.

“Now, they don’t have to worry about size because our size is very accurate. They just focus on visual defects – things that the x-ray can’t detect at this stage. It makes their job so much easier and it gives us peace of mind that we’re delivering to our customers the specifications required.”

This technology will also benefit consumers of Coles’ Crème Royale potatoes in the long-term, with customer satisfaction expected to increase.

“Customers aren’t going to get any surprises of rotten potatoes and internal defects when they cut it or prepare it,” Robert says.

“If we’re going to impact today’s Australian consumer and try to stop the decline of fresh potato consumption, we need to give them greater confidence that when they’re buying our product, they’re going to get value for money and they’re not going to get these surprises of defective potatoes.”

"But you can’t rest on your laurels, you can’t stop there. It’s a never-ending story – you just got to keep working at it."

Robert highly recommends travelling overseas for innovative ideas and to gain an insight into the technology that is currently available to industry.

“There’s no doubt that abroad is where the R&D is in terms of technology for weighing, grading, packing and handling of potatoes. If that is the way your business would like to go, you need to get out and see what’s available,” he says.

“I think that if you can combine that with a trip to one of the international trade shows such as Berlin Fruit Logistica or the Produce Marketing Association (PMA) conference in America, I think that we could all learn a lot more about what others are doing and try to apply it to our own industry where we can.”

Robert reiterated that without the support of the Coles Nurture Fund, it may not have been possible for Red Gem to dream big and implement this x-ray technology into the business.

“The rising cost of doing business in Australia is an issue, and I don’t think we’re alone in terms of that – every year it is becoming costlier to produce. While we look for new varieties and we own our breeding program, that’s still challenging. We’re looking to get more for less inputs and that’s easier said than done,” Robert says.

“But we’ve certainly made a lot of progress there – the reality is that the reason that our business has been able to invest in an x-ray vision project is because of Coles’ ability to commit to an exclusive supply of one of our varieties. That was a challenge in itself: there were lots of hurdles to jump over.

“I’m so thankful we’ve got such a good working relationship with Coles. It’s the best relationship we’ve ever experienced, and I think the Nurture Fund is certainly very supporting of that.”

The innovations at Red Gem are not only limited to the packing shed; soil health is seen as critical to maintain the ongoing sustainability of the business.

“We’re certainly adding beneficial organic matter back into the soil and we’re always on the look-out for other options. Ultimately if soil health improves, we should have less fertiliser inputs and less chemical requirements – it all should flow on.”

Robert is also looking to continue managing Red Gem’s varieties of potatoes that underpin the business and introduce new ones as needed, particularly in terms of increased pest and disease resistance. There is also a future vision of zero-waste on-farm.

“We’re trying to find ways to add as much value to our fresh potato offerings as we can, and value-add some of our waste streams so we can make our growing operations more viable. It could be in the form or processing, or it could be in form of dehydration,” Robert says.

“But you can’t rest on your laurels, you can’t stop there. It’s a never-ending story – you just got to keep working at it.”

This grower profile first appeared in the leading magazine for the Australian potato industry, Potatoes Australia, and was featured in the AUSVEG Weekly Update published 26 February 2019. If you’d like to subscribe to receive a new edition of Potatoes Australia in your mailbox every two months, use our online subscription form!