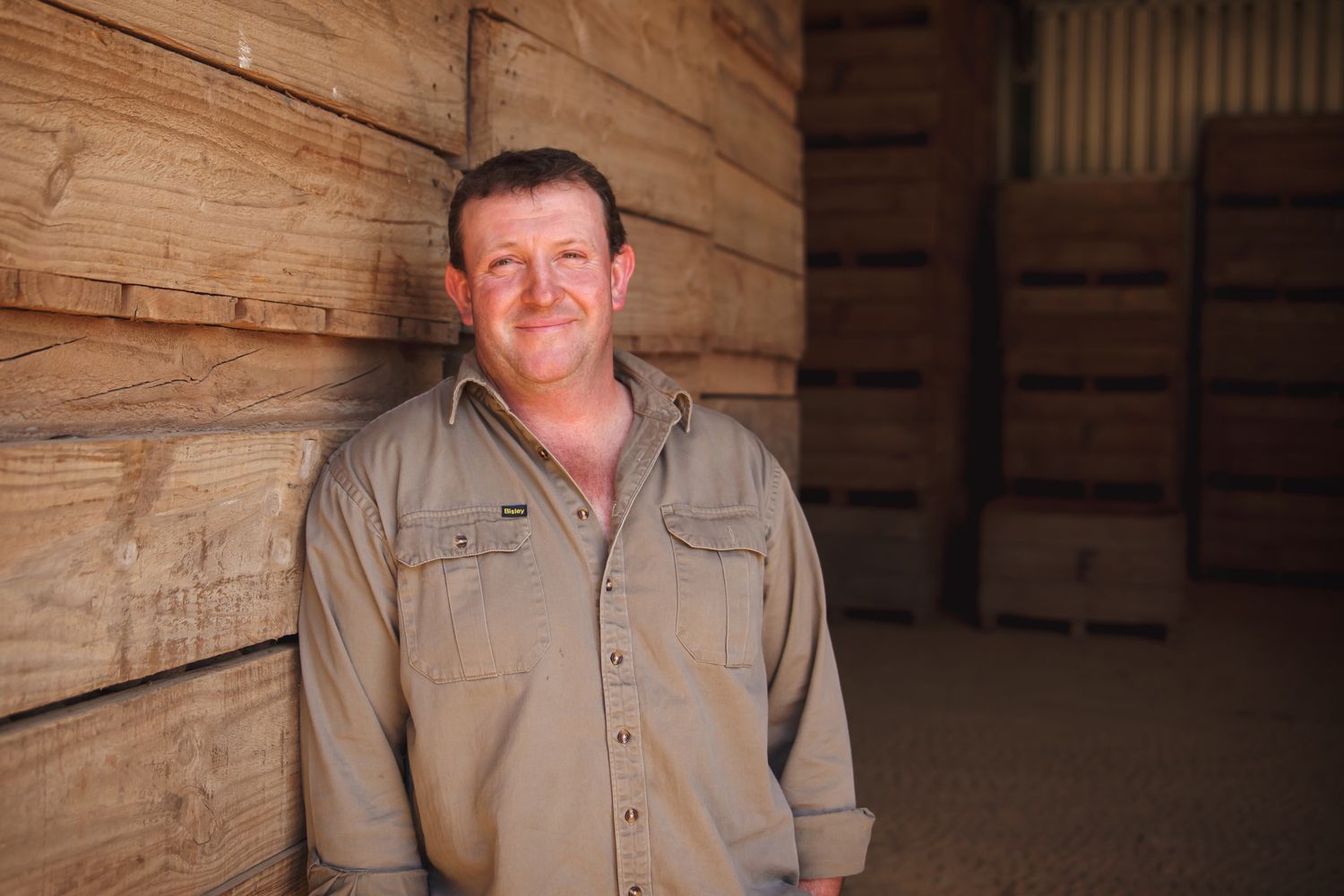 Troy Bensley – or Fred as he is better known – runs Stillbrook Potato and Pastoral Company, a certified seed growing operation in Crookwell, New South Wales. Fred spoke to AUSVEG about his role in the business, its venture into exporting spuds to Fiji and the challenges he faces alongside the wider potato industry.

“I remember the days when Dad used to be ploughing and I’d have my own little toy tractor, dragging the bucket around behind me,” Fred says.

“It was like playing around in the dirt but I just didn’t realise where it’d all end up one day.”

The business also encompasses a poll merino stud, prime lambs and cereal crops when the Bensleys are finished with the potato paddocks.

Fred describes his average day at work as “hectic”, particularly at harvesting time when the days stretch into the night as he tries to get as many potatoes out of the ground before the wet weather sets in.

In addition, the certified seed potato grower is kept busy at home – he and Nicky have three children: Chloe, 6, Charlotte, 4, and Rory, 3.

Stillbrook’s spuds are sold around the country including Virginia in South Australia, the Atherton Tablelands, Gatton and Bundaberg in Queensland and the New South Wales towns of Maitland, Robertson, Bathurst, Dorrigo, Cowra, Orange, Robertson, Windsor and Narrandera.

However the biggest breakthrough for the business occurred around five years ago when Fred was contacted by BGP International Export Sales Manager Patrick McGreesh, who was enquiring whether Stillbrook grew Pontiac potatoes and if they would be interested in exporting them to Fiji.

The family obliged, and Fred is proud of his business’ ability to crack the international potato market.

“A lot of people have tried to get into those markets and they usually get one go at it or it just falls over, but we’ve managed to be able to sustain it for five years – and they’re talking about continuing to import these potatoes for a few more years yet,” he says.

“I remember the days when Dad used to be ploughing and I’d have my own little toy tractor, dragging the bucket around behind me. It was like playing around in the dirt but I just didn’t realise where it’d all end up one day."

Fred nominates water security as the biggest challenge that his growing operation faces.

“We’re not located on a river system or anything like that. At the end of the day, we can only rely on what falls into our own catchments and dams,” he says.

“We prepare by digging bores, just to try and get a little bit of water security. But it is our biggest challenge.”

Pests and diseases are another threat facing all potato growers in the region.

“In Crookwell, we’ve got our own Quality Assurance (QA) system. We abide by our own rules that we’ve come up with and also the standard rules that are nation-wide,” he says.

“We all try to do the best that we possibly can but it’s hard to keep everything within your control.”

Fred also works closely with an agronomist, Tally Matthews, who assists with soil testing and monitoring pH levels, the supply of crop protection products and what fungicides to use as well as communicating the latest products.

Fred says the most enjoyable aspect of his job is meeting others within the potato industry.

“It’s nice to see how other people grow potatoes and it’s good to pick up different ideas and ways that make it become easier,” he says.

“Being your own boss is another thing. You’re in charge of what you do and at the end of the day, you’re producing a product that hopefully the people at the other end are happy with – and that’s probably where you get the most satisfaction.”

There are four other potato growers in Crookwell, and Fred says they talk among themselves to generate ideas and help each other out as much as possible.

“We also talk to people when we sell interstate, and get some ideas about the different climates and the different ways they combat things. We’ve got contacts pretty much all around Australia, which is very helpful.”

There used to be countless numbers of both certified seed and commercial potato growers in Crookwell, and the decline reflects another challenge of encouraging young people to take up jobs within the industry. It is a question that Fred has been asked many times.

“I was born into the potato industry which makes it easier. I’ve got children too and whether they’ll ever be interested, I don’t know. I think the biggest problem is that it’s just so expensive to get into if you were never brought up in it,” Fred says.

“It’s one of those things: You’re either born into it or you’ve got somebody very close within family ties or friends that get you interested. I suppose every industry’s the same – to start from scratch would be difficult and it’s very hard to bring somebody into it that’s never had anything to do with potato growing.”

While Stillbrook Potato and Pastoral Company continues to be a success thanks to a lot of hard work from Fred and his family, the long-term future of the business remains unclear.

“At the moment, it’s fine with mum and dad helping but they’re heading towards 70 now so they’re getting older,” Fred says.

The business’ future depends on whether Fred can employ reliable workers who could assist him in doubling the amount of certified seed potatoes currently grown.

“The demand outstrips supply at the moment. People seem to be looking for seed everywhere – we could quite easily grow twice as much but it comes back to the man hours and reliable staff. At the end of the day, if somebody doesn’t know what they’re doing, it probably costs you more than it’s worth,” Fred says.

“I think there is a huge future in agriculture but it’s important to keep the young people interested in it enough before it gets to a point where it probably can get too far away from us.”

This grower profile first appeared in the leading magazine for the Australian potato industry, Potatoes Australia, and was featured in the AUSVEG Weekly Update published 12 February 2019. If you’d like to subscribe to receive a new edition of Potatoes Australia in your mailbox every two months, use our online subscription form!