Since 2006, AUSVEG has recognised fresh produce growers and future leaders in horticulture with the Young Grower of the Year award.

Winners of this award have championed the success of the industry and continue to show a commitment to innovation to help inspire the next generation of growers.

2018 Young Grower of the Year award recipient Chris McLoghlin shares what has changed since he received his award, what he is doing today, and his plans for the future.

Chris McLoghlin’s career in horticulture has shifted since winning the 2018 Corteva Young Grower of the Year award at Hort Connections.

“We launched at Heston Blumenthal’s restaurants, and the product has recently hit shelves in supermarkets nationally.”

Additionally, Chris is on the board of the technology company Escavox, which he co-founded in 2018. Escavox provides supply chain monitoring and intelligence services for vendors of perishable goods into the major supermarkets and several export channels.

In 2018, Chris took home the Corteva Young Grower of the Year Award and it had a positive immediate impact his business at the time, Mycelia Organics.

“I was contacted by some new customers. Secondary to that, the award raised the profile of the business and meant it was possible to share our story more widely,” he says.

“Winning the award was fantastic recognition of the team’s hard work, as well as stretching the historical functions of the business into new areas and markets.” 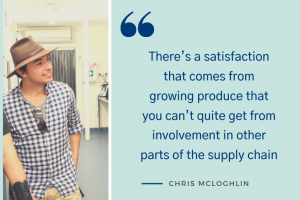 While Chris isn’t currently involved in growing produce, that will soon change.

“There’s a satisfaction that comes from growing produce that you can’t quite get from involvement in other parts of the supply chain,” he says.

“So, we have some trials taking place and plans to be growing some very cool products soon! I’ve been learning significantly about downstream value-adding and distribution. Many of the same lessons from fresh produce apply to the marketing and distribution side of the business, but manufacturing is very different to farming – there is plenty to learn there.”

Chris’ mission is still the same as it was a couple of years ago: Bring the benefits of fungi to the world.

“Right now, it’s through the use of mushrooms as meat alternatives and medicines,” he says.

“There’s huge scope within that. Extending beyond that, building a strong connection and consumers loyal to our brand and mission will allow us to pursue a number of fungi-inspired regenerative food and medicinal production systems.”

Click on each name to read the stories of five other previous Young Grower of the Year award winners: Andrew Bulmer, Danny Trandos, Erika Watson and Daniel Hoffmann.

Hort Connections 2021 will be held from 7-9 June 2021 at the Brisbane Convention and Exhibition Centre.