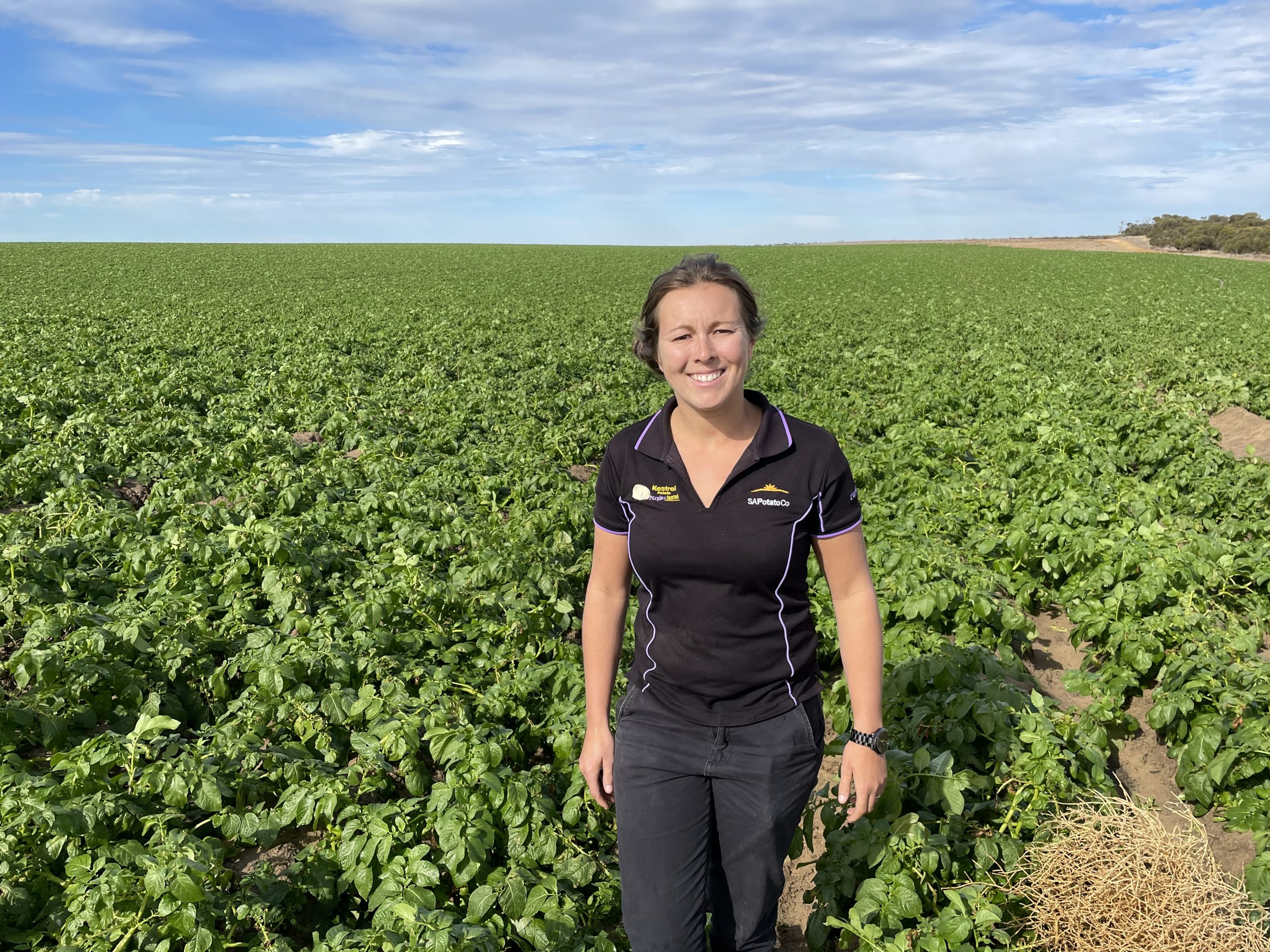 Nicole Stevens travelled to Australia from the United Kingdom after completing her science and tourism management studies. Her career pathway has now diverted in horticulture, where she has risen through the ranks to become the South Australian Potato Company’s Farm Manager at its Parilla operation. Sophie Burge and Michelle De’Lisle report.

The South Australian Potato Company is a family-owned enterprise that has three farms spanning across the Mallee region and north of Adelaide in Virginia. The operation has a team of 120 passionate staff that grow, pack and market approximately 60,000 tonnes of fresh potatoes farm every year for Australian and international consumers.

At the coalface of the Parilla operation is Nicole Stevens – who, at just 28 years of age, is the Farm Manager. Nicole’s work is varied: she manages the farm’s irrigation system and oversees a team of 10 staff, and their collective duties include spraying, planting, harvesting, fertiliser spraying and maintenance.

Nicole’s journey into horticulture hasn’t been straightforward. A few years ago, she was working in hospitality, having studied a Bachelor of Science with Honours in Tourism Management at Sheffield Hallam University in the United Kingdom.

Nicole then decided to come to Australia and travel around, like a lot of young British backpackers in their early 20s. She arrived in Pinnaroo to complete 88 days of farm work in order to earn an extra year on her Australian Working Holiday Visa.

“I was on a farm near the South Australian Potato Company in Pinnaroo, grading on the back of a potato harvester. I then went on to learn how to drive tractors and various other machinery.” Nicole explains.

“When I came to the South Australian Potato Company, I started off as the Planter Operator. From then on, I started taking on further irrigation duties and maintenance and then that’s when I became an Assistant Manager. After six months, I naturally progressed into becoming the Farm Manager of the Parilla farm.”

Nicole certainly isn’t moving back to the UK anytime soon. In May this year, she was granted her Australian Permanent Residency and has settled in Pinnaroo, a 15-minute drive from the Parilla farm.

“I have fallen in love with the whole industry, and now I don’t want to leave. I wake up every morning and I can’t wait to go to work. Every day is different and a challenge, but it’s what you make it. If you want to progress and perform, it’s a great industry to do it in,” Nicole says.

“I also enjoy the growing and learning about plants and their different needs. Every potato requires different growing practices. There’s a lot more to growing potatoes than what people think.”

Like all horticultural growers, the weather is a major focus for Nicole and her team at the South Australian Potato Company.

“Potatoes don’t cope well with the heat and the wind, which plays a big factor in how we can grow them,” Nicole says.

“We have to make sure that we are watering the pivots sufficiently enough to tackle these challenges.”

Another issue is on-farm labour, and finding workers who want to come to the country and learn new skills.

“Although we offer on-site training, some people are not used to it and feel like they are too isolated. Unfortunately, with everything being so competitive right due to the COVID-19 restrictions, everyone’s in the same boat,” Nicole says.

“We are all struggling to find workers available to come out here. But we take the challenge as it is, and we’ve now gone through training people that we currently have to do those different roles, such as grading. Utilising the people who we already have helps to overcome the challenge.”

“As the South Australian Potato Company, we’re always looking to make sure we keep up-to-date with any new pests and diseases that might be coming or are already in the area,” Nicole says.

“It’s important that we use our agronomist once a week to keep on top of these.”

“I have fallen in love with the whole industry, and now I don't want to leave. I wake up every morning and I can't wait to go to work."

Nicole says the South Australian Potato Company has been very supportive of the training opportunities that have been provided to her.

“I obtained a business management degree and have undertaken an agronomy course, which has been key component moving forward with a vertically integrated agriculture business,” she says.

“The company put me through an intense mentoring program that provided me with a high level of learning and professional guidance to become a successful grower within the potato industry.

“Although I studied at university, I didn’t need any specific qualifications or degrees to for this role –training was provided on-the-job as well as extra courses such as chemical certificates, forklift licence and truck licences.”

“We’re a big advocate for making sure everyone has the right licences and training to truly undertake the job role safely.

Nicole wants to erase any common misconceptions about the horticulture industry.

“Some people want to come out and work on farms but don’t because they think it’s bad pay or poor labour. Fortunately, that’s the not case here in this area,” Nicole says.

“Everyone who comes here is treated well.”

Attracting school-leavers and young adults into the horticulture industry can be difficult, but Nicole shares the positives of working on a potato farm.

“Although being a farm manager is a high-pressure role, you have a lot of flexibility and a good work-life balance. We’re in a nice community around here and everyone socialises; it’s not just work and living on the farm 24/7,” she says.

“Our seasons are very different. In the summer, we could be working a lot harder and then come winter we have a bit more of a break, and we take that time back. We take the time to catch up on little things and the pressure is not as high.

“The advice I’d give to the younger generation would be: if you’re looking at getting into the industry, contact local farms or industries or packing sheds and see whether you can pick up some extra work to gain that experience, even if you just want weekend or after-school work. If you want a pursue a career later in life, at least you have a little bit of experience, and it also helps to find out what it is you’re interested in within the industry.”

Nicole is proud of her journey so far and the position she finds herself in today. Her contribution to the industry was acknowledged at the 2021 National Awards of Excellence, where she was nominated for the Boomaroo Women in Horticulture awards.

“I’m proud of the year and the growing season that I’ve had. I’ve overcome challenges and have managed to learn how to one day become one of the best in my field,” Nicole says.

“Hopefully in the next five to 10 years, I’ve taken that next step forward in my career by becoming a Farm Operations Manager.”

Nicole Stevens has been interviewed by AUSVEG for a video as part of its Harvest Trail Industry Service Collaboration project. Watch it below. Click here to watch more videos in the series.

This grower profile first appeared in the leading magazine for the Australian potato industry, Potatoes Australia. If you’d like to subscribe to receive a new edition of Potatoes Australia in your mailbox every three months, email communications@ausveg.com.au. Please include your postal address.