Preparing for exotic leafminers: a threat to Australian horticulture

Internationally, exotic leafminers have been known to cause problems early upon arrival before chemical management plans have been adjusted to conserve beneficial insects.

Knowing this, surveillance of exotic leafminers across Australia’s horticulture industries is critical to ensuring that correct chemical choices can be made as soon as exotic leafminers arrive, to avoid sudden outbreaks and crop losses, and increase the chance of local containment or eradication.

Early detection surveillance should be undertaken in high risk crops and during high risk periods, when climate suitability for the pests are high. These crops include Fabaceae, Solanaceae, Cucurbitaceae, Apiaceae, Brassicaceae, Asteraceae, Alliums, and many ornamentals.

A web-based tool is now available for exploring risk of exotic leafminer across region and season (see Figure 1). Surveillance will be particularly important when a high-risk season overlaps with young crops, because young crops are particularly susceptible to leafminer damage.

How do I survey my farm?

To survey your farm as part of an early detection approach, choose a block of crops – at least 30 rows of plants – that may be at high risk as a result of being an at-risk crop, near to transport routes and unloading areas, or on the incoming wind side of farm or paddock edges.

Within the block, survey by following a snaking transect line (see red dotted line in Figure 2), which includes broadleaf weeds present along the edges of the block and travels down every other row of plants. Grasses do not need to be inspected. Scan the upper surfaces of the leaves as you walk, looking for signs of stippling or mining (see Figure 3), at a slow walking pace of 10 seconds per metre to ensure high confidence in your ability to detect leafminer damage. Always record your survey results.

It is important to collect at least three mined leaves, but preferably as many as possible. Label the bag using a permanent marking pen with the following information: name; contact number; date; address, town, postcode; crop type.

Once the sample has been collected and stored, immediately report the suspicious damage to the Exotic Plant Pest Hotline on 1800 084 881. This will put you in touch with the Department of Primary Industries or Agriculture in your state or territory. 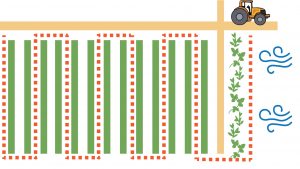 What if these pests become established?

Regular crop monitoring will also be crucial for management. Using sticky traps is another useful way to monitor leafminer populations, because they attract adult leafminers and may give an indication of when leafminer flies are moving into the crop. Pupa trays identify whether active fly populations are present around leaf mines – these also an important and easy-to-use monitoring tool.

Furthermore, appropriate chemical choices within Australia have also been identified and several permits are now secured for future management. 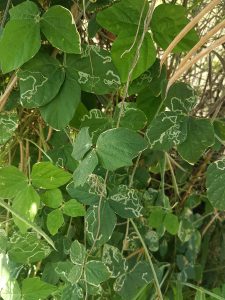 The MT16004 project team has developed preparedness and management guides to provide support on surveillance and monitoring. Click here to access these guides.

There is also a series of short, informative webinars that delve deeper into leafminer risk, surveillance and management. Visit the AUSVEG YouTube Channel to view these webinars.

For more information, contact AUSVEG Biosecurity Officer Madeleine Quirk on 03 9882 0277 or madeleine.quirk@ausveg.com.au. Alternatively, you can visit the project page on the AUSVEG website by clicking here.

Any unusual plant pest should be reported immediately to the relevant state or territory agriculture agency through the Exotic Plant Pest Hotline (1800 084 881).

The project RD&E program for control, eradication and preparedness for vegetable leafminer (MT16004) has been funded by Hort Innovation using the vegetable, nursery, melon, and potato research and development levies and contributions from the Australian Government.